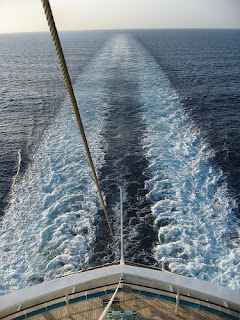 When I tell people that I am fascinated by perfume, spend all my free time smelling the stuff, or reading and writing about it, I am often broadsided by the question: "So okay, then, what perfume am I wearing?" The gauntlet is thrown, a defiant and faintly sceptical smile playing around the mouth of my challenger. I shuffle a few steps nervously, shunting the gauntlet an inch or two, before picking it up gingerly between my forefinger and thumb, and holding it with outstretched arm at a safe distance from my body.

"Er...um...this is the bit I'm not very good at, actually."
I detect a flicker of a smirk from the other party.

"I mean I have smelled loads of perfumes, but it is harder to identify them from cold - you know, without anything to go on, apart from the smell, that is."

"Well......?" The question is accompanied by an interrogative eyebrow and a broad grin - or is it a rictus?

"Noooo - it is Paloma Picasso/Light Blue/Daisy/Chanel No 5!/Ysatis!!" (Or substitute any other well known designer brand that also smells nothing like my wild stab.)

This is my Achilles heel, you see. I am absolutely rubbish at this, the most popular party trick of them all for any self-respecting perfumista...

Except in the case of Mr Bonkers' mother. I am sharp as mustard there. I know instantly if she is wearing Coco Chanel or Burberry Women. This is because she only owns two bottles of perfume, both of which I gave her. And yes, I suppose that is the scent decoding equivalent of shooting fish in a barrel... 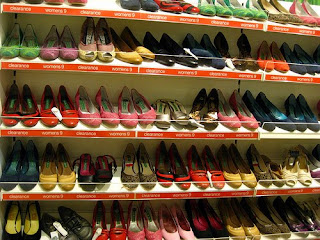 Thus I was particularly proud of myself the other day in T K Maxx. I was peering at the shoe fixture, deciding whether to buy a pair of wedgey Mary Janes in an unknown brand. I couldn't make up my mind whether they had that "artisan/geek chic" look, or were just plain nerdy. I bought them, and today they went back, which I think answers the question.

Anyway, as I was inspecting ankle straps and T-bars and such like, I suddenly caught a whiff of something familiar wafting from the general direction of the shopper next to me: a lady of a certain age, with white hair and unremarkably dressed - what is known round here as a "tidy woman" - connoting someone unassuming and fairly conventional, who doesn't really stand out in any way. Apart from her scent: a bold, spicy oriental.

Before I could stop myself, I was in there like the proverbial ferret up a cardboard poster tube.

"Excuse me, but are you wearing Coco?"

(SEE, EVEN THE SCENT WEARER MAY FIND THIS IDENTIFICATION BUSINESS TRICKY!) 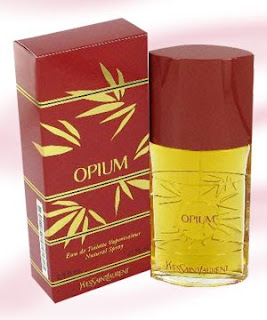 "Opium, that's it!" Adding helpfully, after a pause: "By Yves Saint Laurent."

"Aha!" I replied, bursting with glee: "Same general idea. They are both spicy orientals, you know."

"Right" replied the lady, with a humouring smile, before scooting hastily round to the aisle with the 6-7s. This may have been a ruse to avoid the random bonkers person who just accosted her. I prefer to think she had oddly sized feet.

Whatever, I was happy with my work. This was true "guessing in a vacuum", even if ballsy spicy orientals only count as entry level in this game of scent trail sudoku.

There is in fact an official term for something that enhances mood in this way: an SSRI. It stands for "Selective Sillage Recall & Intercept". It's a game I hope to play again, and maybe I will nail it next time...
Posted by Vanessa at 15:40

Phew, thanks Musette, I find that reassuring to hear! And it is exactly as you say - many scents smell sooo familiar to me - yet remain elusively nameless. : - )

I'm hit and miss. I can get the really obvious ones: Calvin Klein Eternity, JPG Classique, Amarige (honk, honk). And then my workmates get peeved, and start coming to the office in really obscure stuff, and thrusting their wrists under my nose and saying: 'So, what's this one, then?' One colleague is hell-bent on exposing me as a fraud, and she's doing pretty well, so far: I failed to identify her Lancome Poeme (blee) and ... get this ... Reese Witherspoon in Bloom for Avon :(

Honestly, I'm really not worried about that. or about the fact that for some reason, my friends who know of my obsession seem to think I know what each of the scents found in stores here smells like...
I get that a lot in other situations as well - for some reason people think of me as a walking dictionary just because I studied English language.
For some reason, when people see someone who knows more about any topic, they will mostly try and make you feel stupid. Nobody knows everything and it just goes to show what kind of a person they are.

Hey, Scentimentalist - you are doing better than me even to ID three scents correctly on a repeat basis! And that Reese Witherspoon was a complete curved ball...

Ines, I do think of you as a walking dictionary - your command of English is most impressive! : - )

I am not doing so well with my one word for mosquito bite (and that was technically Serbian...), although I would recognise the Croatian for "toll" (on your very fine network of motorways) if I saw it again. It was rather a frequent occurrence!

Unless I am particularly familiar with a fragrance - have worn it myself, or a close friend has worn it repeatedly - I can't identify a random scent either. I'd actually be more likely to identify notes IN the scent. Luckily, people don't challenge me often.

I won't yank your perfumista card if you won't yank mine... and you're right, Coco and Opium smell very alike (sadly, I dislike them both). It is rather sweet, though, to hear of a "tidy woman" wearing Opium.

There is another challenge: The perfumes smell different on different people. I remember some Osmanthus scents, which I could not stand to smell - not on my skin, not on a card, not at all, to ask an newly-born perfumista what she is wearing that smells so nice and somehow peaceful - it was Osmathus Yunnan, which I detected as so called catpee. It was rather magnifique on her.

What I always recognize is Coco mademoiselle, Amarige and Chanel Egoiste Platinum and my beloved Un Jardin apres al Mousson (easy because of the melon and ginger).

Mals, that is interesting that you mention ID-ing perfumes by note rather than naming them, for I was presented with just such a challenge the other night. The conversation went something like this:

You are quite right to point out that we may be confused by variations in how a scent performs on other people's skin. And I would like to think I could recognise Jardin Apres La Mousson as well, but I wouldn't bet on it...

Am so late to this one, but just wanted to register how much fun I had reading it, nodding vigorously along and chuckling through.

SSRI, indeed. For the olfactory "uptake."

Later on, I'm going to introduce a corollary game, note anagrams, in which one goes to a perfume counter and lines up bottles with contain the same notes, but in different order. (The lavender is in the opening of/loud in this one, but doesn't appear until AFTER the citrus in this one/is a subtle undertone in that one.) You know, same notes, but mix 'em up.

I think I might need one form or another of an SSRI, eh?

Erroneous olfactory "uptake" for the most part, it must be said, though it seems I am in good company!

Your note anagram game sounds fun but fiendish. The notes in so many scents seem to coalesce on my hormonally challenged skin these days - or go "splat" - to use the technical term for this phenomenon.