Rising Damp! The Flight of The Flacons - II 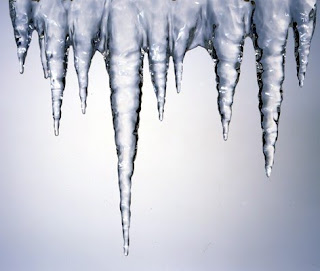 Ever since acquiring a beer chiller to "curate" the key bottles in my collection, I must confess to feeling rather virtuous for taking such pains to care for my perfumes, keeping them in their optimum temperature controlled environment of 10 degrees C - well, except for the citrus ones, that is, who allegedly prefer it a little chillier - but I refuse to pander to minority groups.

Any feelings of smugness have been gradually eroded of late by the appearance of icicles on the inside roof of the fridge, which gradually lengthened, their sharp tips grazing the top shelf bottles. Perfumes may like it cold, but they do not like it wet.

Then this week - an odd one meteorologically speaking, what with this volcanic dust cloud and all the downstream aviation chaos it has wreaked - I realised that the icicles had now all melted and dripped through the fridge interior, forming puddles on boxes and depositing droplets of condensation on dozens of decants. 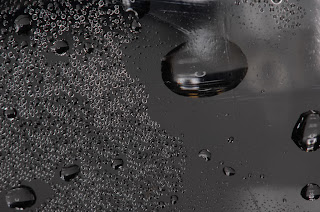 There was nothing for it but to evacuate the bottles for the second time and defrost the fridge properly. So once again, there was a sprawling refugee camp of perfume migrants on the bedroom floor. I closed the curtain to prevent the spring sunshine from inflicting any more damage. Having wedged a towel into the fridge to soak up the moisture, I set about examining the boxes to see what state they were in. Well, sadly there were about half a dozen, including PG Brulure de Rose and Creed Love in Black, that have water marks and some warping. And Ferre by Ferre is positively undulating, to the point that the lid no longer fits! So bendy indeed, that the Downward Facing Dog would be an absolute breeze for it. I'll call that Warp Factor 9. But mostly the damage was around the 3-5 mark, and it was the matt cardboard boxes rather than the glossy ones (Bvlgari Jasmin Noir, EL Sensuous) that were worst affected (packaging designers, please take note!). Now, the other day I burned an indelible brown ring onto the kitchen work top in two very visible places, so in the grand scheme of things this is not a big deal. And Mr Bonkers is being very supportive about the kitchen disaster: "I hated that pattern anyway!"

I have learnt from this that keeping perfumes chilled and dark is easy (a fridge), dark and dry is easy (a drawer), but chilled, dark AND dry presents more of a challenge.
Posted by Vanessa at 14:46

so if I understand you correctly you put the perfumes in their boxes in the fridge?

I did! I am not sure where I would put the boxes otherwise. I may just be more vigilant about the humidity levels in future and hope for the best...

Oh, the obsessive store the boxes in boxes if the bottles go in the 'fridge, I think. I would not be one of those, though I did once briefly flirt with getting a cube model for my scents. The important or known to be finicky ones, at least. But, in the end, since as you note, it's hard to hit a trifecta, and I can choose a cool(ish) spot that is dark and dry, I go for drawers/dark/dry. And variations on such. Though I am not perfect.

You could always lay a towel over the top of them, and swap it out regularly...

Pshaw. I think we should go for the best, most elegant, most practical, most rewarding solution of all. A full out walk in wine cellar. With one zone devoted to perfume. Awesome. :)

Hi SS, May I firstly thank you for your highly educational comment. I had to look up "trifecta" and got "parimutuel bet", which I also had to look up. "Cube model" sounds vaguely Picassan, if that is an adjective.

Boxes within boxes smacks of Russian dolls. And of someone very keen indeed. The towel idea is a good one - I am currently half way there with some polythene bag arrangements.

The "full out walk in wine cellar" (note your nifty use of antithetical prepositions) would be the business. There is just the small matter of the digging. The flowerbeds last weekend were enough to be going on with. : - )

I've never actually put them in the fridge but they are in a dark drawer and cupboard lined with black tissue paper! I like the fridges Frederic Malle sometimes have but they don't offer darkness.

It's a tricky thing where to store perfume!

I want a walk-in wine cellar too. One with one of those automatic doohickeys that monitor humidity levels...

As it is, I have a dark cabinet for out-of-season and vintage. And hatboxes on the dresser for the current rotation. And my Petite Cherie, famous for "going off," is in the fridge. (It has no paper label, and never had a box.) I did take all mine out of their boxes and stored the boxes, folded inside another box, in the guest room closet.

It's the best I can do at the moment. Sigh.

Rose, the black tissue paper is a nice touch!

Muse, I have a Petite Cherie sample teetering on the brink of going off, and I think my Eau de Charlotte has already turned.

Your hat boxes sound charming! Round ones, I take it? I hadn't thought of storing perfume boxes inside one another, but that would take up less room for sure. The longevity of perfume is partly down to husbandry, I suspect, but some of it may just be a matter of luck - AGs seem to have the precarious hold on life of certain orchids, or pretty much any houseplant that has the misfortune to be in my care.

PS Those icicles are actually made of acrylic, but they look jolly realistic, I thought.

A perfume wine cellar! What a completely excellent idea! Bezr and I used to have a wine cellar, and subsequently Bazr had 1,000+ bottles of wine in there. Now we live on the 25th floor in an apartment building, and subsequently, we have 1,000+ bottles of wine in our walk-in closet. (Perhaps I exaggerate somewhat. But I do still refer to it as the "crawl-in" closet for the snugness of space left for actual humans to move around in there.)

Gosh. My bottles rough it out in the mean counters of our master bath, exposed to light sporadically the day and the occasional steam bath. I stand humbled.

What amazing views your apartment must have! And that is a most impressive wine collection, however unconventionally housed. : - )

Regrettably though, I have no option but to report you to Social Services, who may see fit to put your perfume collection on the "At Risk" register, citing the Scent Crime Legislation relating to Bathroom Storage, as documented in the blog post of 29th October 2009, in evidence against you.

Eeek! I must go on the lam, Kenzo's "UFO" and SL "Arabie" stuffed unceremoniously in my check-in luggage!

You're doing a runner? Is that 1am as in a nocturnal flight? Might we possibly even be talking of a Vol de Nuit?