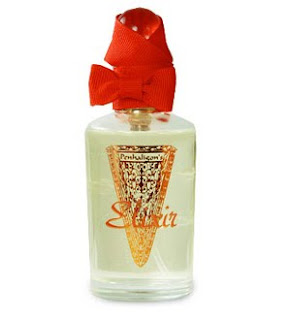 The day I was in Zürich on my solo sniffathon, specifically when I was in a branch of Starbucks above a bookshop, peering at the price list to see what exorbitant sums they wanted for a cup of Tazo tea (with milk!), my mobile rang. It was a Swedish friend of mine, who was spending a few days in London and felt an urge to call me from a branch of Penhaligon's to tell me she had just bought a bottle of Elixir.

Well, my first reaction was puzzlement, as I thought I knew the whole line, but Elixir was a new one on me. My friend described the notes to me over the phone, and I have since found the whole list on NSTperfume:

It sounded like a woody oriental, and is in fact a masculine, which may explain why it wasn't on my radar. The perfumer is Olivia Giacobetti, she of the enviable cheek bones and creator of minimalist ethereal beauties like FM En Passant, Diptyque Philosykos and L'Artisan The pour un Ete. That said, she is also the nose behind Idole Lubin, which is a scent with boozy, spicy heft.

The SA apparently positioned Elixir to my friend as a "pulling scent", and I was very excited about this, as I already consider several woody-incensey orientals to have that important property (important in an altogether theoretical way in my case, you understand): Ormonde Jayne Ta'if, Kenzo Flower Oriental and Tauer's L'Air du Désert Marocain to name three.

So I rang the Penhaligon's mail order line and they kindly sent out a sample of Elixir, plus one each of their new Orange Blossom EDT and Eau de Cologne (which deserve their own review). 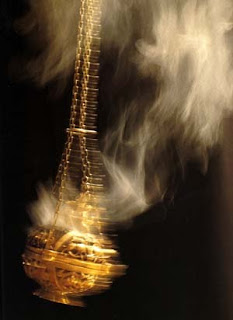 On Saturday, to motivate me to double dig the flower beds and de-dandelion the drive, I applied Elixir for the first time. In the opening I got a dusty, spicy note that reminded me very much of SL Femininité du Bois and a little of DSH Nourouz (the scent formerly known as Tamarind Paprika). This quickly morphed into straight up church incense, but a very soft version of same - like DKNY Black Cashmere but less piquant, or like Etro Messe de Minuit, but mercifully devoid of its foetid flagstone note. A bit like Heeley Cardinal even, but without the Lemon Cif riff. And the whole tone of Elixir is even quieter, even more zen-like and meditative than any of those mentioned above. 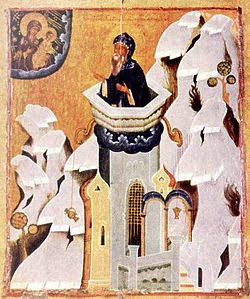 Today I tried Elixir again. Now it may well be that the perfume was understandably apprehensive about my forthcoming review, for it decided to show me a few more facets this time. Today I get the incense still as the dominant note, but it is partnered with more woody notes and the rose. I would be lying if I said I got any jasmine or orange, mind.

On balance, it is still a little too incense-y, but it is very beautiful in a bone dry, austere, Simeon Stylites kind of a way. Could I pull someone wearing this? Hmm, if I was on one of those retreats where burnt-out business people go to detox, paint, learn reiki, gamelan drums and generally how to be their Best Possible Self, then I would say most certainly.

In Stafford's local nightspots, frequented by gaggles of 20-something girls with exposed midriffs and vertiginous heels, I am not sure it would quite cut the hair gel. Beyonce Heat or Britney's Midnight Fantasy might be nearer the mark.

Me, I will happily continue to wear Elixir whenever I want to escape the hurly burly of the working week. It is a fragrant way to achieve inner calm without having to focus on my core breathing or contort myself into a Downward Facing Dog.
Posted by Vanessa at 17:15

Wonderful review, even if I cringed with recognition. So, to get it out of the way: "Hello, my name is Madame X...and I have ordered the Tazo tea." ;)

I'm so glad to hear you found the Elixir to be a morpher from wearing to wearing. My decant still sits in the drawer, awaiting final judgement. Which perhaps is unfair. Perhaps I should empty my mind, and just turn to it when I am ready to be both contemplative and willing to play.

I've a few other nods I want to toss your way for this post, but I'm going to zero in on "foetid flagstone note." Love it! :)

"Contemplative and willing to play" is just the mood you need for this one. Supple joints would be a bonus...

(Hmm, did Blogger eat my comment? Will try again - if it's a duplicate, please delete, dear FS.)

I have a sample of Elixir but have not tested it on skin yet. Sniffed from the vial, it's very much potpourri and I'm doubtful. But after reading Brian's review of it at I Smell Therefore I Am, I MUST try it on skin. Here's the link (be prepared for some spitting of tea, if you're not careful).

Puzzlingly, I can't find Elixir in Brian's archives, though my searches did lead me to an interesting review by Nathan Branch. And an adjacent snap of him washing his car!