Oranges Are Not The Only Fruit: Penhaligon's Orange Blossom EDT 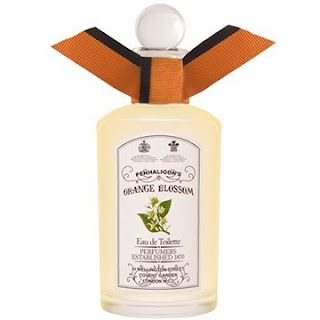 When I started this blog I pretty much decided that I would not routinely review newly launched scents, leaving that job to the many other reviewers in the fragrance blogosphere endowed with more expert noses than me. As a rule, I have felt more comfortable reviewing less well known or offbeat scents I wish to bring to wider attention. However, every so often a new perfume is launched that is just too lovely for me to let it pass without comment... Ormonde Jayne Tiare was one such, and Penhaligon's Orange Blossom EDT (a new release in its Anthology Collection) is my latest "squeeze" (no pun intended).

Yes, those nice people at Penhaligon's happened to enclose samples of Orange Blossom and the new Eau de Cologne in the same package as Elixir, and it was love at first sniff. The fact that Orange Blossom is the creation of my "secret correspondent", Bertrand Duchaufour, in no may predisposes me to favour this scent. Oh okay, maybe just a little. Though it didn't work with Havana Vanille - or not yet, anyway - though HV is awaiting a retrial. 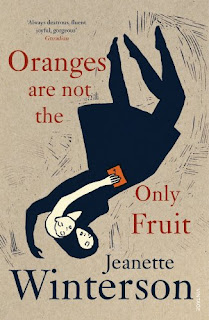 As for the reference in the title to Jeanette Winterson's Whitbread Prize winning novel, whilst shamelessly opportunistic on my part, is not wholly without foundation, for Penhaligon's Orange Blossom (from here on in POB for short : - )) also contains lemon-cedrat, peach flower and pink berries. Which is a bit of luck... I never thought I would be so quick to embrace berries of any kind in a composition, but there you go.

So how does POB smell, apart from beautiful? These are my thoughts, without reference to the other reviews of this scent which have already appeared - I have purposely not studied them in case they influenced my own response. 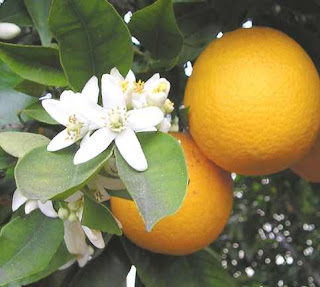 Well, creamy and vanillic and a little spicy would be words that spring to mind. There is a citrus twist, but it is soft and muted. Is this a sort of Amaranthine treatment of orange blossom, you may be curious to know? Well, there is definitely a nod in that direction in terms of overall vibe, but POB is more demure, and there is absolutely no whiff of thigh here, nor is it as tropical as Amaranthine, or as creamy, or spicy, or (arguably) as sweet!

I would say POB has a lot in common with Serge Lutens Fleurs d'Oranger, of which it is a sanitised version. By that I mean that it enjoys a similar depth and creaminess, but is quieter, with no indolic twang from the white florals. This being a good thing in my book. 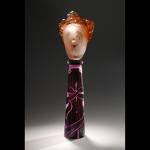 Here are the notes of the Serge Lutens, which have several key elements in common with POB - I promise I didn't peek at these before the comparison occurred to me!:

I have additionally conducted several side by side tests with Jo Malone Orange Blossom, which also comes across as indolic - soapily rather than skankily so, if that makes any sense at all. At the same time the Jo Malone is sparklier and brighter and more in-your-face than the Penhaligon's, and lacks its creamy depth. Can a perfume be simultaneously soapy and sparkly, I hear you ask? Well, if a washing up liquid can, I don't see why not. If JMOB was a handbag it would be all spangles and sequins, while POB makes a quieter statement in brushed suede.

So, in summary, the new Penhaligons is a sort of de-skanked Fleurs d'Oranger or an Amaranthine that has been "tango-ed" in a demure way. And just as oranges are not the only fruit, nor does POB smell like the whole orange. And is the better for it.

And if a single reader gets my drift, I will eat the bow of the bottle I hope to buy some day...

UPDATE: Since this review was published, Penhaligon's has very kindly sent me a bottle of POB, so if the above imagery is in fact less than totally impenetrable, I may have soeme serious bow-eating to do! And it looks quite thick material....
Posted by Vanessa at 18:04

Honestly, all I could think about while reading this is that it's orange blossom time again and I will take it in any available fragrance (ok, I'll skip the soapy one but already wore SL Fleurs a few days ago!).

Can a perfume be simultaneously be soapy and sparkly? Oh, my, but let me have you tour No. 5 via my nose...

Anyway, I chuckled at your title, knowing well the book (and the pretty good movie version). Imagine the fun at finding differences among oranges within! Fun. I tend not to go orange, in perfume, and am intrigued by your evaluations.

And now off to other entries, as I see you have been busy since last I stopped by...

Ines, If you like the SL, I feel sure you would like the Penhaligon's - as a more "office-appropriate" type version, say!

Btw, I think our packages to each other are still in the air somewhere!

ScentScelf, coincidentally Jeanette Winterson was on a political chat show last night talking about the upcoming general election here! And whilst I think this scent is delightful, far be it from me to act as the "Agent of Orange" and push you down a note route that is not generally congenial.

I do not care for orange blossom - it and jasmine grandiflorum being the only white flowers that I struggle with. OB can seem either very flat and soapy, or very raspy to me, and I don't enjoy either version.

But it seems to me that you've been having lots of fun with OB, and I'm having fun reading your explorations.

I do take your point, and both those tricky notes are in here, but I think POB treads that fine line between soapy and raspy, and is more "creamy/suede-y", whilst still smelling unmistakeably of orange. : - )

Oops! FS, your package has safely landed at the end of last week - sorry, I forgot to tell you. :) The weekend was hectic so I completely forgot.
I hope mine is there soon!

Lovely writing, as always. I now want both to re-read Oranges and to sample POB. Bertrand has a lot to answer for.

Your package arrived today, for which many thanks! Am excited to have some of the very perfume that in its short life has already been on a skiing trip... : - )

Hebe, I can help with the sampling process if you are not near a Penhaligon's stockist imminently...

Great to hear it's there.
One went skiing, the other got signed by the creator. ;)

I only just discovered this yesterday -- and it blew me away! Good lord, it's wonderful! Cherishing my sample vial as I write, and sniffing long and carefully -- there is *so* much going on with this scent. It's gorgeous.

Ines, haha! They do both have their tales to tell, don't they? Am testing three of the other samples you sent me today.

It is beautiful - and complex - isn't it? Citrus scents can be quite straightforward, but this has a lot going on, as you say.

Hi Vanessa! How does it compare to the L'Artisan version?

Well, I would put the L'Artisan more in the Jo Malone camp, as brighter and thinner (albeit beautiful). This has more depth and creaminess and spice. If you think of a less indolic Fleurs d'Oranger or an orange Amaranthine with the "flatness" of Carnal Flower you won't go far wrong!

Okay, I want it. I am looking for several months and weeks after something limey or orange-y but all lime turns sour on me and orange ist a better choice towards my skin.
Ha, too bad I have to come to London to get it :-)
Must play at lottery - FLORIS ist also on my way...

I bet I will love it - but now how did you eat the bow? Sugo&salsiccio would be a great combination to it ;-)

I can send you a sample - am going off on a trip shortly, so maybe I should send it from Germany?! : - )