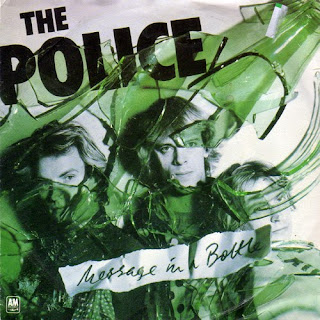 Okay, so that is a shameless example of tabloid journalism if every there was one, right up there with sensationalist headlines like: "My daughter grew another head", "I gave birth to a mummy", "The woman with a 14 stone tumour", and my all-time personal favourite: "Freddie Starr ate my hamster". For I guess this isn't so much a "message", as an inscription. And not so much a "secret" inscription either - as in surreptitious or clandestine - as merely overlooked.

Regular readers may remember that I was fortunate enough to meet Bertrand Duchaufour at the launch party for Penhaligon's Amaranthine. I described it as one of my Transcendental Experiences of 2009, partly because he sniffed me wearing his creation, but also because he dedicated my bottle to me in silver ink, with his best wishes - or "estime" in the original French. 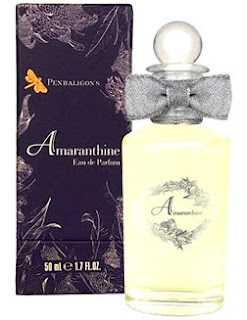 At the weekend, whilst making up a decant for Ines, I happened to flip the base of the box up and noticed - for the first time in the six months since the event - that BD had written a second inscription on the bottom. This read:

Only of course it said no such thing. "Szande fou" sounds like one of those new industrial eco-zones in China, just along from Guangzhou. After some considerable head-scratching, and flicking through my Harrap French Shorter dictionary, it dawned on me that the message must read:

Which translates as something like: "To a keen fan of perfume". "Friande" is a versatile word in French, with connotations of both enthusiasm/fondness AND gourmet taste - "friandise" meaning a delicacy or titbit - sometimes even a specific type of pastry or cake. And we are not talking a greasy slab of apple turnover from Greggs the Baker or a sticky Bath bun the size of the new head the daughter has grown, but rather something infinitely more dainty, and by inference, elaborate and intricate.

So what may I take from this newly discovered dedication? That the great man thinks I am Bonkers about Perfume. That much is clear. And given the provenance of the perfume on which this is written, and the nuances of the word "friande", I am also going to infer that he thinks I have discerning taste.... : - ) Or a "fine gueule", as the French might say: an appreciation of the finer things in life, whether olfactory or gustatory. Did I just write "gustatory"?? Ah well, the word doesn't get out much, so please let it go. 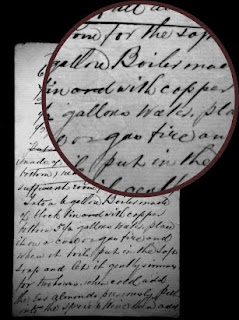 Interestingly, on the Penhaligon's website there is a fragment of an old perfume formula written by William Penhaligon himself. It looks no less tricky to decipher than BD's handwriting (not helped by the silver pen, in his defence), but clearly demonstrates the usefulness of a magnifying glass on these occasions.
Posted by Vanessa at 21:08

There's something particularly rewarding in having to work through a challenge before discovering The Man has called you...well...Bonkers About Perfume. N'est pas?

Congrats. :) And thanks for the fun tale.

:happy sigh: lucky lucky you. I love it when I find that I have inadvertently bought a signed copy of a book, but having a hand-written message from Bertrand would just be the best thing ever. I could do with "Au Courage" on my bottle of Timbuktu.

He has (re)done another perfume for Penhaligons. I am frankly terrified to try it in case I fall hard for this one too. It's a "luminous honeyed floral".

Interestingly, the inscription predates my decision to start the Bonkers blog by three weeks, so BD was clearly able detect my unchannelled madness...

I hadn't seen the description "luminous honeyed floral", but I have a sample of the scent and was planning to review it this week, namely the new Orange Blossom cologne. I rang up and asked for a sample of something else, and this and the Eau de Cologne came in the package!

How wonderful! And I will get a decant from that bottle. :) Yay!

You will indeed - it is on its way! Thanks for being the catalyst for the discovery.
: - )

how delightful! I wanted to go to that sooo much and was away working :-(

It would have been nice to have seen you there!

Exactly one thousand years ago, when I was in high school French, I always connoted "gueule"with "gullet." (Which is another word that doesn't get out much, and perhaps for good reason.)

But that is a sensational story-- he touched you in a lot of different ways-- that is so nice...

Gullet is not good, is it? Whereas "guillemot" is perfectly acceptable. I am none too keen on "gristle" either. Who was it who coined the phrase "maternal gristle syndrome" to denote the sacrifices women make for their families, serving their menfolk the choicest cuts of meat etc? I think it was Boris Vian, but that was also at least 750 years ago.

Yes, it was a memorable encounter, and this further twist came right out of the blue!

I love finding something unexpected months down the line. What a treat!

Hmmm....if it wasn't Boris Vian who coined that phrase, there is a small but worrying possibility that it may have been me.

What a cool surprise!