Chanel Paradoxal And The Peculiar Pull Of Plum-Themed Perfumes 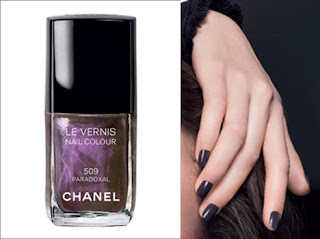 This week my brother is attending a conference in Toronto on "Earthquake Engineering" (I take it that that means building structures which withstand earthquakes, as opposed to trying to "engineer" their occurrence. I am quietly but fervently hoping that he will find time to pick up a bottle of Chanel's "must have" nail polish colour, Paradoxal, at The Bay, a very fine department store within striking distance of the conference venue. Mind you, an epically bearded seismologist might cut an incongruous dash amongst the make up and perfume counters; plus he runs the very real risk of being plonked on a stool and "made over" with something like Lancaster's Light Enhancing Adaptive Sublime Fluid Foundation SPF 6.

So why my feverish interest in this latest Chanel nail varnish? I am a chronic and seemingly incorrigible nail biter, and hardly ever wear the stuff. But Paradoxal is such a sublimely wearable shade - and would coordinate so nicely with a number of garments I own in offbeat shades of heather and plum - that I am prepared to sacrifice my anti-social habit at the altar of digital accessorising. 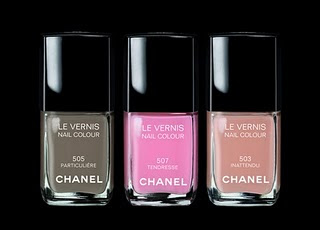 Some of the other recent Chanel nail colours left me cold, mind: the likes of Jade, Tendresse or Inattendu (mint green, pale pink and peach respectively). These ice cream colours are pretty enough, but exert no visceral attraction. Particuliere, on the other hand, would have been a different matter - a sludgy mushroom / taupe number now sadly changing hands for upwards of £30 on Ebay. So I am hoping that my brother will be able to surf the crest of this particular nail colour wave, and secure a bottle of Paradoxal across the pond before it even reaches a stockist near me, never mind before said stockist runs out of the darn thing in the blink of an eye.

And my mounting enthusiasm for Paradoxal also got me thinking of plum-themed scents that might offer a further "finishing touch" to my upcoming autumnal ensembles. For I doubt I will be in much of a plum mood before September, you see.

I should, however, mention that plum notes and I hsve a bit of an ambivalent relationship. I remain deeply scarred by accidental whiffs of Poison in the 80s. Les Liaisons Dangereuses, a newish release, is nothing more than "a Poison-lite" for the Noughties to my nose, complete with that proprietary By Kilian headache-inducing accord.

And yet...a couple of plum scents have wormed their way into my affections, and either one would top off my plum nails and sundry purplish garments. They are Indult Isvaraya and Natori by Natori. 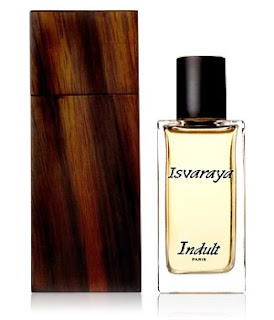 I find them rather similar in vibe, with Isvaraya a slightly more masculine "bass" version and Natori the more girly "soprano". They are both woody, slightly powdery, comforting and dreamy scents. (A special word of thanks to Lovethescents for introducing me to Natori!)

Well, well, both have patchouli, plum and jasmine - this is the first time I have scrutinized the two scents properly - and while Natori has a bunch of other things as well, it appears that my nose is genuinely on to something in detecting a resemblance! 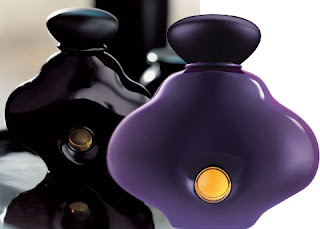 I would liken this pair a little to Shiseido Féminité du Bois, if you lost the pencil shaving note, the overt dustiness and the spices. Okay, not much like Fém du Bois at all, really, and yet these three scents are calming in a similar way.

Yes, you did read right... it is cedarwood for breakfast, lunch and supper - those notes are from The Perfumed Court, so they're good enough for me. Pencil shaving frenzy, as I say. There is, crucially, also some plum in there.... I mention FdB only because people cite it as a meditative scent, which I feel Isvaraya and Natori are up to a point. "Poignant" and "earthy", the Perfumed Court description goes on to say, which is spot on. I am sure someone somewhere likened Natori to the scent equivalent of a silk teddy, and that is a pretty nifty simile too. 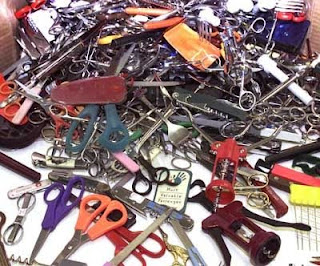 So I am all set, bar the nail polish. If my brother manages to score me a pot, I hope he remembers to put it in his hold luggage, otherwise it will languish in a perspex tower at Toronto airport, along with umpteen pairs of confiscated scissors, penknives and other weapons of putative destruction - till long after its fashion moment has passed. I guess the authorities are right to be cautious - I am not sure how easy it would be to keep a 747 airborne while being forcibly made to have a manicure by a bearded scientist who knows all there is to know about engineering disasters, natural or otherwise...

Photo of Chanel Paradoxal from Flickr, Indult Isvaraya from Luckyscent, Natori from Fragrantica. Photo of Vivienne Westwood dress from Fashion Beans. Photo of sharp items from Bullworks.
Posted by Vanessa at 17:35

Great post! I have never really understood the craze for designer nail polish, but you're right, paradoxal sounds lovely!

All this talk of plums and cedar is getting me excited for Fall! And it isn't even August yet!

I must say I am very much on the coat tails of this trend, but as you can see I am hanging on to it by my fingernails!

Ha, I'm wearing Paradoxal right now! It's gorgeous (especially in the sun!), but I feel like it's not really suitable for Hawaii, where we are headed in two days. Still, it being so expensive, I'll keep it on until it's a mess. It will be perfect in fall.

Thanks for stopping by and confirming that my nail polish lemming is well founded. : - )

Have a great trip to Hawaii - you'll be on the home turf of that great niche scent line, Saffron James!

Plum can be so tricky in fragrances, I find. As much as I adore Natori, I cannot stand Creed's Acqua Fiorentina. Now as for nail polishes, you've hit another soft spot with me :-) Love, love, love painting my tips and almost always have them covered in something.

I've never tried any Chanel polish, although the colours look so beautiful. That Paradoxal looks great for cooler weather, I agree. My favorite range is Essie, though. It lasts and lasts. By the way, let me know if your brother doesn't get you the Chanel...I'll head over to The Bay myself :-)!

oh thank goodness I'm not alone - I too am a nail biter/picker! Those colors are beautiful.

And I must say I don't mind the pencil-shaving notes of certain fragrances. I'm weird.

Gosh yes, that new Creed was a big let down, wasn't it? I remember your liking for Essie now you mention it - I believe you sent me a few pics of a blue shade, which might have been that range?

Thanks a lot for the offer to procure me some Paradoxal - will see how my brother gets on!

Glad to find a biting buddy! I am also a self-excoriator, which is equally naughty. : - )

Re pencil shavings, I expect you like Dzhongkha then?

As much as I am not all about the perfume...I'm going to have to skip to the perfume on this one. My nail situation has been publicly vetted...healthy, clean unless challenged by high gardening season, occasionally polished in a tasteful neutral fashion. (Or so I like to believe.)

I still have, like, 10 bottles of color, and they trend purple, or brown, but still. Putting color on is like me wearing...Chanel No. 5. Or Britney Spears Circus Fantasy. Either way, just not me.

As for the perfumes you invoke...that Natori is a smooth and silky operator. I don't know if I get "purple" out of it, per se...it would need more intensity, or more fruit/jam, or more fluorescent something. Because on me, it is a gently sweet musk-in-waiting, with enough amber to help it go down that more easily.

Feminite du Bois, OTOH? Right there. When it's not hitting you with cedarwood, it *is* purple, in its packed with stuff from stem to stern way. Man, I love that stuff. Challenging as all get out, but never cruel, and almost always rewarding.

I know nothing of the Indult. I shall therefore end commenting here, and retreat back to my lair, trying to think of scents that are "purple." (Prose, that's easy. Perfume? Worth reflecting upon. Maybe with a purple beverage.)

Truly, nail polish isn't me either - also on a practical level, owing to the biting issue - but it is something about which I periodically fantasise. I would always keep my nails short, mind, otherwise they could seriously impede one's typing skills.

You raise a moot point about the purpleness or otherwise of perfume, and I agree entirely that Natori doesn't come over as purple, but merely as "containing plum". It is softer and more delicate - perhaps a pink in my mind's eye, or a light mauve.

Fem du Bois, funnily enough is a browny colour to me - with carmine red accents at a pinch, but no purple in sight.

So that is all very interesting....

What purple beverage did you go for in the end? Grape juice? Our Ribena ticks that box - with the added bonus of Vitamin C.

I was completely asnomic to Natori! Either that or there is water in my sample. I should pull it out again and check if my nose has changed.

Well, Natori is pretty subtle, but not that subtle, I wouldn't have thought. : - )

Do give it another whirl...

Well, paradoxal sounds really interesting and Chanel is one of the best choice. Anyway, I am not good for a fragrance descriptions but I wanted to have a perfume collections.