Basenotes Mini-Meet Up And That Old "Skin Chemistry" Chestnut 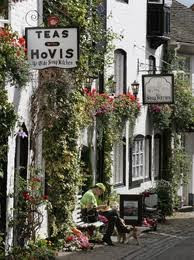 As regular readers know, I travel extensively with my work - indeed I am off to Germany again in a couple of hours - so there will be the usual posting break on Bonkers. One of the perks of all this business travel has been the chance to meet some of my virtual perfumista friends in person: in Germany, Switzerland and the USA so far. But recently it came to my attention that there was another perfumista on my doorstep in Stafford! He contacted me through the Basenotes forum (where he goes by the name of Ralph), and we met for coffee on Saturday. We chose the steps of the art gallery as our meeting point: I said I would be carrying a bright orange Ormonde Jayne bag(!), but thanks to our highly attuned powers of fellow fumehead detection we recognised each other instinctively without the aid of props. : - )

It was a bright, sunny day, and we headed for Starbuck's round the corner, where we whiled away a pleasant couple of hours sitting outside in the main shopping thoroughfare. As is the way with these things, we got straight down to business and it wasn't long before the table was covered with bottles, decants and vials - and the entire smellable length of our arms in various scents - much to the bemusement of the people at adjacent tables.

Ralph had brought along a number of samples for me to test blind and try to identify, a fun challenge at which I failed dismally. Two of these were Montale Black Oud and L'Etat Libre d'Orange Fat Electrician - the oud note smelled familiar, but I couldn't put a name to it(!), though I could at least pick out the vetiver in the sublimely silly Fat Electrician.

Meanwhile, I was keen for Ralph to try three perfumes that I thought were on the turn or completely off: a mini of Jo Malone Lime Basil Mandarin, one of The Different Company Osmanthus, and a bottle of Floris Night Scented Jasmine. The Jo Malone we decided was not off after all, just unpleasantly basil-y! My mini was probably a bit long in the tooth, and it is possible that the basil had become more pronounced over time, but we concluded that the main problem was that it was simply not very nice to start with.

The tests with the Night Scented Jasmine and the Osmanthus were most illuminating. I had given up on the former because it had an oily, alcohol-y smell, and on the latter because of a synthetic, plasticky note. We conducted a side-by-side test, which had the added variable of male versus female skin. 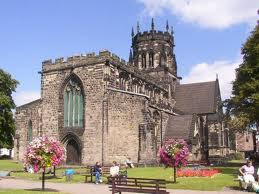 To our surprise, on Ralph's skin both perfumes positively bloomed - the Night Scented Jasmine was a sumptuous floral, while the Osmanthus was fresh and fruity. Needless to say, they were both rehomed immediately. They were later joined by my albatross bottle of Juicy Couture Dirty English, which was like Caron Yatagan on me, but much softer on Ralph's skin. Indeed, given his leaning towards powerhouse fragrances like Aramis and Kouros, it wouldn't have mattered if it had smelt more strongly of Yatagan on him!

So that was all very interesting and satisfactory. After two rounds of drinks at Starbuck's, we sat on a shady bench in the churchyard of St Mary's for a little while, before grabbing a bite to eat in the Soup Kitchen, Stafford's oldest tea rooms, dating back to the 16th century. I had their last portion of soup, while Ralph opted for a sandwich, followed by a cream tea split between two. Well, just a single scone to be precise, because the ones from the Soup Kitchen are noted for being monstrous, tottering Towers of Pisa. We sat by the window upstairs in a relatively secluded spot, where we could carry on the serious business of spritzing and sniffing without raising too many eyebrows. 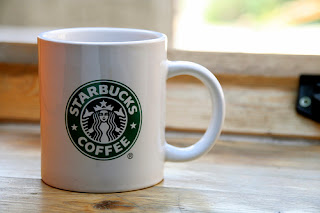 Four hours simply sped by, and then it was time for me to do some errands in town before the shops closed. Oh, and special commendation is due to Ralph for his tea assembly skills at Starbuck's. As reported in past posts, I am very particular about how my tea comes, and my worst nightmare is a barista pre-adding copious amounts of milk before the tea bag has had a chance to brew; sometimes up to 50% of the liquid content has been cold - or, bizarrely, hot - milk in tea made for me by cafe staff. Ralph, on the other hand, brought me a mug with a tea bag floating in it, plus a small measure of cold milk on the side. Result!

Now, I have just been looking at Basenotes to see if there is a search facility that would enable members to find others based in the same town. I tried inputting "Stafford", but the first hits were for Lee Stafford, the celebrity hairdresser, so I sense that this very specific functionality I have in mind may need more work. I did note that there are currently 53,304 members of the site, with approximately one in ten active (5,162).

So you never know...chances are, there's a Basenoter living near you too!

I agree that it would be really nice to have a search facility based on location at Basenotes. It would have to be something that one opted in on... rather than active by default though! I've definitely had my best perfume sniffing sessions with fellow 'fumeheads.

It would be handy, wouldn't it? As it happens, you were in my mind on Saturday and I asked Ralph if he knew you, but he said not. We were talking about official Basenotes events, and I mentioned having been to a couple.

I. KNEW. IT. Skin chemistry matters. Why else would Eau Premiere be nice on me and unbearably frooty on my mother (the No. 5 Queen)? Why else would my sister smell so fabulous in Coco Mademoiselle, while most of the other people wearing it smell like Cheap Generic Guy Cologne? Why else would C&S No. 88 be all man-sexy on me but boringly soapy on The CEO? I could go on, but I won't. I feel vindicated.

Oh it is a shame how we 'fumeheads have to hide our love away from society in the upstairs of a tea room. Maybe one day we will be understood...

Glad you had a good meet-up with Ralph (four hours!), Stafford sounds/looks lovely. Must look into Floris Night Scented Jasmine as it is one of the few flowers I'm partial to. Too bad your search only turned up a celebrity hair-dresser! BTW LOVE a cream tea!

Be very vindicated - the differences in our side-by-side trials were marked, even allowing for a gender divide. And I do find the same disparities in trials with female friends. One woman I know has skin like a venus fly trap, which eats the top notes and goes straight to the basenotes on first application of the perfume in question!

I guess we fumeheads are social pariahs to an extent - the public sniffing is a bit like public breastfeeding - one is aware that it might not quite be the thing. : - )

The Floris is a nice example of jasmine - fairly clean and light as the flower goes - or it is when it is fresh/on Ralph.

Can recommend the Soup Kitchen for all its cakes if you are ever up this way!

What a great time! I luuurrve meeting other perfume fans. You're brave to spritz in public, though -- I'd be sure to encounter some perfume-o-phobe giving me the stink eye.

The night-blooming jasmine from Floris was included in my very first introductory samples kit from TPC. It was florescent on my skin, positively overwhelming and synthetic-smelling. I scrubbed and scrubbed and it was still there. So here's another take on skin chemistry. I don't know how anyone can say it doesn't exist when something that lasts 5 minutes on me lasts 2 hours on somebody else (and vice-versa, although it's usually me that gets the 5 minutes).

I may come to England one of these days and if I do I'll look you up!

Fumehead hook ups are a lot of fun, indeed - I remember your meeting Waftbycarol not so long ago - and I would love to see you if you came to the UK. Popping down to London on the train is no biggie if that was where you would be headed!

Interesting that you found the Floris synthetic smelling from the start...for me it was a couple of years down the line that I started to detect an "off" quality.

And you are right to mention this other aspect to skin chemistry of "differential evanescence". I believe it has something to do with whether one's skin is dry or oily.

ooh!! how wonderful that you and Ralph found one another; it is so nice to meet a fumie friend close by.

Safe travels to you!

I am nearly half way through my trip already - there has been no sniffing component as yet, but I may manage to rectify that at the weekend or if I have some downtime next week.

Well this is delightful! I had no idea you'd write us up and am chuffed to bits you did! We had a very nice afternoon, did we not? I learned a great deal from you and enjoyed our conversation enormously. I'm - as you now know - very happy to snort frags in public and found our multiple testings most enlightening. It goes without saying that I'd be very keen to meet up again whenever you fancy!

I didn't want to confuse readers by deploying all your pseudonyms at once, so stuck with the Basenotes one. : - ) But just as I go by my real name AND Flittersniffer AND VM I hate civet (on Basenotes), I can confirm that Hubert Hubert is Ralph's other screen name.

Yes, enlightening is exactly the word, and I would be up for another round of mutual sniffage in between my next bouts of travel!

It's a done deal, Vanessa/Flittersniffer/VM I hate civit!