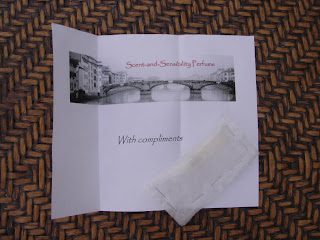 Back in April, I applied to take part in a Mystery Sample Project hosted by Ronny, the propietor of an online niche perfume store called Scent-and-Sensibility in the West Country. You have to live in the UK to be eligible - hurrah!...we Brits are often excluded from prize draws and the like on geographical grounds - and you have to post your unfolding impressions of a mystery scent (supplied by Ronny) on the company's Facebook wall.

Unsurprisingly, Ronny was pretty swamped by the interest in her project from UK-based perfumistas, and advised me that it could be a few months before my turn came around. Then yesterday my sample arrived, and I started testing it today: so far on skin, but trials on other media such as paper and fabric are up next...

You can follow the blow by blow meanderings of my confused nose on Facebook - I believe that eventually Ronny puts you out of your misery and tells you what it is in fact that you are smelling. I have played this game before, under the auspices of the Le Labo Synthesthesia workshop, which I documented over on Ça Fleure Bon. I was pretty rubbish at identifying perfume accords in a vacuum back then, and my nasal receptors seem to be living down to their reputation as a finely blunted instrument on this occasion too. I get that Mystery Scent is green, in a grassy/herbal/slightly resinous kind of way, but more rigorous application of nose and mind is called for!

Right, so the game is over, and as it turns out I correctly guessed the name of the Mystery Scent as Narziss by Dorissima. My nose only gets some of the credit for this feat, and my professional skills as a researcher the rest... For I have never smelled Narziss, only it seemed to be the most likely candidate out of all the fragrances in Ronny's online store. A quick glance at past Mystery Scents featured in the Facebook thread confirmed that they were also ones she carried, so I basically checked the notes of all 44 and decided which one the scent I was smelling most closely resembled!
Posted by Vanessa at 17:33

That sounds fun! Dee and I did our own version of that game, we'll see how it turns out. :)
Love the expression "finely blunted" instrument! :D

It is a fun thing to do, isn't it? And you have reminded me that it is time to have another sniff of this particular mystery scent and see if I can detect the notes any more accurately today (doubtful!).

Oh! That sound like something I want to try! Thanks for the tip!

Well, as you are in the UK, you are eligible to apply!

It sounds like fun but I would be so self-conscious that I might loose any sense of smell.

Ah, well the way to approach it is perhaps not to imagine anyone is reading your "nasal stream of consciousness" musings. Oh dear, that unintentionally sounds a little bit like phlegm!