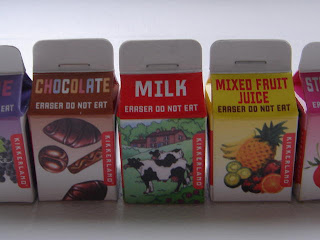 Kikkerland Design Inc. is a US company with its roots in Holland (the word "Kikkerland" is a term of endearment for "The Netherlands" apparently, meaning "land of frogs"). This explains why it actually says "Scented Erasers" on the packet, but as a British person with some 48 years of manual error correction under my belt, I cannot bring myself to refer to this small item of stationery as anything other than a rubber. Some US readers may be sniggering at this point, but the readership of Bonkers is currently heavily skewed towards British people googling "Lidl perfume", so the transatlantic titters may be minimal. By the same token - in the unlikely event of these terms arising naturally in the context of a scent-related post - I shall not hesitate to refer colloquially to a cigarette as a "fag", while strenuously avoiding all references to "fanny".

So that's cleared that up. Now I got these rubbers as a joke gift from my best friend Clare, owner of the perfumista pin-up pooch, and yesterday I finally broached the packet and actually smelt them. Before getting into my sniffing report proper, I should perhaps lead with this overview of the company's ethos, taken from its website:

"Welcome to Kikkerland Design Inc., where creativity runs rampant and even the most utilitarian gadget becomes a delightful discovery.

Since 1992, the folks at Kikkerland Design have traveled the world in search of original designs for things that can make life more enjoyable. Clever things to intrigue you. Smart things that make everyday tasks easier. And gentle things that make you feel happier when you use them."

I guess a fragrant rubber comes under the heading of "gentle things to make you feel happier". In theory at least... 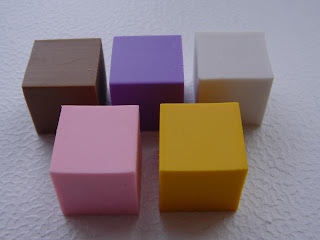 So there are five rubbers in the range, small plasticky cubes - PVC free, Latex free - which got me wondering what they are in fact made of. I've done a bit of research and think they are probably vinyl rather than the synthetic rubber variety. They are not much bigger than a sugar cube - or even a Dolly Mixture! - and coloured rather sickly shades suggestive of their odour/"flavour". These are: strawberry, milk, mixed fruit juice, chocolate and grape. They are packaged, for reasons that pass me by completely, in what I can best describe as an imitation Tetra-pak milk carton, which you have to rip off to extract the rubber inside.

Right, so I smelt them each in turn - there was no point trying to conduct a blind test, as it was pretty obvious which was which from the colour. I could only actually detect a scent at all in three of them: chocolate, grape and vanilla. Each was a bit synthetic, but recognisable as the scent in question. The mixed fruit juice and strawberry ones were, however, completely odourless. Then Mr Bonkers had a go (not noted for his nasal prowess, obviously, but with the benefit of being on hand at the time of the trial). Now he could only smell the milk one, which he pronounced to be "very vanilla-y".

So in summary, a range of scented rubbers that are not very scented at all, really.

And you may be curious to know - and I am going to tell you anyway! - how they rub out. Not too badly is the answer, although each cube is so small that it is hard to get decent purchase. And obviously we are only talking pencil marks here.

So the trend to functional fragrance in products as diverse as fabric conditioner and drawer liners - drawer liners of all kinds, indeed! - marches inexorably onwards. According to the recent BBC documentary, Perfume, Brazilians have a ceaseless appetite for all things fragrant, so maybe these rubbers would go down well over there. I remain unimpressed myself. 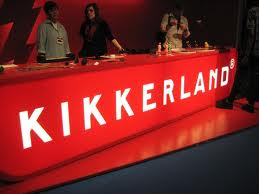 And of course the other thing about this product idea is that people don't write with pencils very much anymore - or pens, for that matter. Pretty much the only time I write with a pencil is at one of those residential management courses held in a country house hotel - you know, the sort where couples go for adulterous trysts and ballooning weekends.

So on balance, it is much simpler to type rather than write with an implement. Then if you do happen to make a mistake, it is just a question of hitting "delete", "back space" or "undo". Yes, if I was the marketing person at Kikkerland responsible for picking this particular product, I'd be inclined to Kikkerland it into touch - back into the "mad box of frogs" whence it came...

Or - to quote that song by the Cardigans... I would


Photo of Kikkerland offices from fastcompany.com, other photos my own
Posted by Vanessa at 15:38

I'd like to hear more about the gentle things that make me happy. I could use those. Kikkerland seems to be, at the very least, a really friendly company. :)

I agree that the company ethos is wholly commendable, and the Electro Man plug below is especially cute.

It is just a shame the rubbers failed to live up to their fragrant promise!

I stock Kikkerland products in my store, and they are, on the whole, absolutely delightful! Though, I must admit, I have not opened any eraser packages to sniff them (yet).

And how interesting to meet a Kikkerland stockist, of all obscure perfume blogger crossover possibilities! Take it from me, the rubbers have more aesthetic value in their little milk cartons than any olfactory interest. Though they do rub out reasonably well, as I say!

Love it! Cute colours and packaging, too bad they are so tiny and don't smell much. I had a collection of scented rubbers when I was in Middle School and they were strong stuff. Maybe that's the root of my perfume obsession???

When I got to the bit about couples going away for "ballooning weekends" I wondered for a sec if it was some weird new practice I hadn't heard of, lol! (I blame all that talk about the US meaning of rubbers).

How interesting that you have come across some more highly scented rubbers yourself. These ones are so small they could do with three of them being stuck together, you know, like Neapolitian ice cream. There is a chocolate, vanilla and strawberry one come to think of it!

I see what you mean about "ballooning weekends", haha! There seems to be quite a bit of scope to riff off rubbers... : - )

We would save our pennies (or beg for money) to buy these scented wonders, bringing them to school to show off, trade, sniff in class...

The stationary industry created a monster obsessed with smelling things! I had a reputation at my previous job as being the "mail smeller" (some inks and paper reek terribly); I smell things people offer up, saying "OMG smell this, it's disgusting"...

I've traded up, obviously. I sniff perfumes instead of erasers shaped like various desserts and cartoon characters, but the end result is the same: a sense of satisfaction and a moment of joy.

It was a revelation to me to learn that the scented stationery industry is so diverse and well-established - these products were launched after my own school days, I sense...

There is a particular glue we used in arts and crafts at school that came in a huge tub and looked like toffee - it had a wonderful scent - there's a project for Christopher Brosius, come to think of it...

Anyway, happy that stationery items were the catalyst that sparked off your interest in fine fragrance, otherwise we might be reading "Redolent of Rubbers", which doesn't have quite the same ring to it!

I'm sure I have seen scented rubbers decades ago, probably Japanese in origin. I certainly bought a Japanese scented pencil a long time ago, which I still have somewhere. I know I saw it recently, but I can't lay my hands on it right now to check if any trace of the fragrance (melon, supposedly) survives

A melon pencil - intriguing... I think the scented rubber trend must have passed me by. I was probably too busy collecting rubbers shaped as dragons and banjo-playing tortoises (aka Itty Bittys!)