Stafford's Own Kate Middleton: She May Be A Lookalike, But Is She Also A Smellalike? 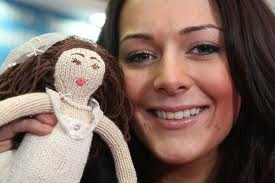 Following the recent royal tour of Canada, Kate Middleton's popularity is on the ascendant. The word on the street is that she could soon attain the iconic status of Princess Diana, without any recourse to peeping coyly from under her fringe, or batting of spider's leg lashes. Personally I am fixated by her svelte silhouette, and imagine her vital organs jostling for position above and below the Panama Canal of her waist.

Yes, everyone wants a piece of our Kate, and as the runaway success of Illuminum White Gardenia Petals demonstrates, a lot of people are happy to conjure up the Duchess in a bottle with every spritz of her wedding scent.

And for those who haven't managed to catch a glimpse of Kate Middleton in person, or snag a bottle of White Gardenia Petals, there might be a chance to see Kate Bevan instead, her 22 year old professional lookalike - who is originally from Wolverhampton and lives in Stafford! 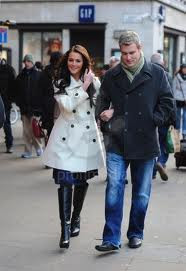 Now as it happens, the chemist featured in my last post is no ordinary neighbourhood pharmacy. Though not on account of its woefully limited fragrance selection - that is par for the course, more or less. No, the chemist in question has hit the national press because it was there that Kate Bevan worked as a pharmaceutical assistant until she got her lucky career break!

People had often remarked on the resemblance between the two Kates, but from the engagement onwards things really took off. "Nearly everyone who comes through the pharmacy door makes a comment and gawps in total shock", she told The Daily Mail last November. "I went out to buy a sandwich for my lunch and I was stopped four times by people in the street."

Kate Bevan got married herself last May, but she reckons her husband Nathan looks more like Harry than William, and William is apparently not her type... 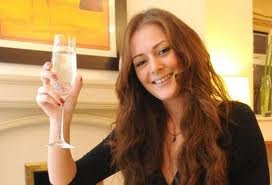 In the spirit of verisimilitude, Kate Bevan also took elecution lessons to lose her West Midlands accent and sound more of a sophisticated southerner.

Now, because Kate Bevan's job as a professional lookalike is to be a top to toe replica of her namesake, if she hasn't already done so she should research the Duchess's scent wardrobe. Apart from White Gardenia Petals, I received a tip off to the effect that Kate Middleton wears Narciso Rodriguez For Her EDT, and her liking for Dune is well documented.

And it goes without saying that if Kate Bevan wishes to smell the part, she will need to look beyond the perfume range of the chemist where her newfound stardom all began...


Photos of Kate Bevan from zimbio.com, profimedia.si and expressandstar.com
Posted by Vanessa at 20:08

Good for lookalikie Kate, I'm sure she could make a good living at it. I suspect the Duchess keeps her vital organs in her hand-bag, so hope she won't be losing pounds as well as her accent. Nothing against her current scents of choice but may I suggest she upgrade to Chanel No.22?

LOL at the thought of the Duchess keeping her vital organs in her handbag!! It might be touch and go sizewise, mind, as royal handbags tend to be token receptacles, just as that maple leaf head adornment she wore in Canada could be construed as a token hat... : - )