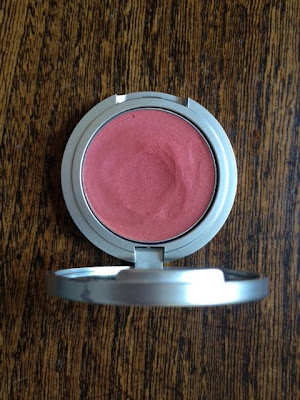 Perfume lovers the world over like to spread the love. They do this on the swap scene of Makeupalley, the various split sites like Google Scent Splits, as well as spontaneously sending so-called "care packages" of perfume to fellow fumeheads in need, of which I have also been a lucky recipient.

Unfortunately, the postal services pretty much anywhere you care to name take a dim view of mailing perfume. I had a pop at the US Post Office once following an encounter with a very draconian counter clerk in Venice, LA - see the US POST OFFICE DIGRESSION about half way down this post. And fragrance is still prohibited by dangerous goods regulations here in the UK, though that looks set to change for consumers in July of this year according to an article last November in the trade magazine "Post and Parcel":

"Royal Mail customers will be able to post items like aerosols, nail varnishes, perfumes and aftershaves to UK addresses from next year, after a review of rules banning such items from the postal network." 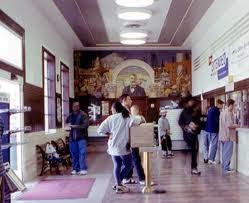 The rules regarding international outbound parcels were revised earlier this month, and sadly the position has not eased on shipping perfume to friends across the pond, though it's good news for those of us who had been champing at the bit to send lithium batteries on a bit of a hike.

"Aerosols will continue to be prohibited from international parcels, as will nail varnish, perfumes and aftershaves, but when lithium batteries are contained within an electronic device, the revised rules will allow them to be sent internationally."

So it looks as though, for the foreseeable future, it's business as usual when it comes to posting perfume outside the EU, namely getting creative with the content descriptions on the customs form. The tried and tested favourite of Makeupalley swappers who are bold enough to flout the rules in this way is: "used cosmetics samples", though the prize for the all-time most audacious descriptor has to go to The MOTH, Bloody Frida's husband, for writing "knitted hat" on a consignment of perfume bound for me. Included in the parcel were admittedly a couple of skeins of sock wool, but even so, "knitted hat" was spectacularly stretching the point. (The whole charming story is reported here.) 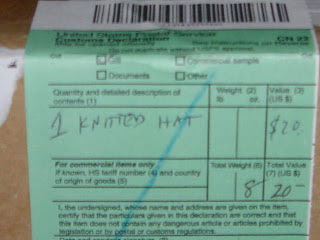 Yes, I have been sneaking packages of perfume past international customs officials with the weasel words "cosmetic samples" for some five years now. I guess "perfume" could very loosely be construed as a subset of "cosmetics", certainly of beauty products. However, "the beauty" of saying "cosmetics" rather than "beauty" is that it sounds reassuringly solid, and not likely to slosh around in transit, like a cleansing lotion or shampoo - or God forbid, an alcohol-based product like perfume. The addition of "used" merely serves to gross out the officials - and with any luck put them off their spot check duties with disagreeable visions of half-used cacky cakes of shimmer shadow, claggy mascaras and smeary stubs of lipstick.

And then some time last year, I entered into a swap more as a "coerced act of kindness" than because of any interest in the items the swapper had on offer, quite the reverse. The swapper in question - as I later learnt - has acquired a bit of a reputation for cajoling her fellow Makeupalley members into doing deals they would not otherwise have entertained. In this case she wanted 15-20ml of Creed Love in Black in return for anything I could pick out from her list of mostly make up items and drugstore fragrances. At one point she said I could have EVERYTHING on her list, which actually filled me with alarm. 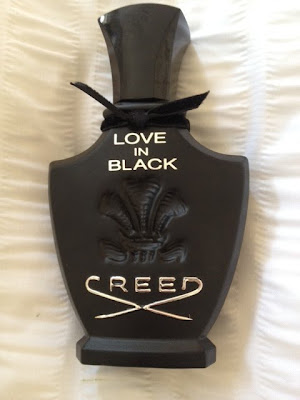 So in the face of such a compelling appeal to my better nature, of course I caved in to her plea, and we settled on the Creed in return for a Sue Devitt blusher. It was in a colour (Malay Reef) which may or may not have suited me, not ever having come across the brand in the UK. It was hard to judge the shade in Google images, but it looked on the dark side to me, the sort of shade that Christina Aguilera might even consider ill-advised. Not to worry, I thought. I am going to consider this as a good deed for an unspecified timeframe! (A year did sound rather a long time to me. What about all those charity bags that come through my door with annoying frequency, all vying for my attention? Am I to ignore them, pleading a prior Creed good deed last March?) 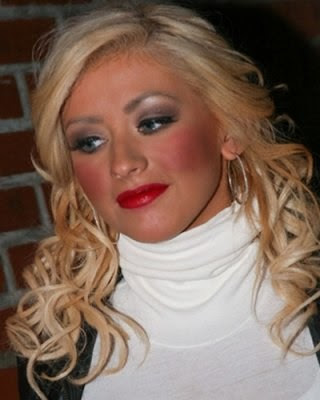 But anyway, I sent off my end of the swap, duly labelled as "used cosmetic samples", even though it was in fact a single large atomiser of Love in Black (with a smaller one as an extra). After a couple of weeks and a few bizarre crossed wires with the swapper, the details of which I shan't trouble you with, I received my package containing the blusher. And - finally - I also received my customs-snook-cocking comeuppance. For the blusher had been swiped already ie it was "a used cosmetic", if not a sample as such. And that had not been made clear in the exchanges between me and the swapper. The plastic metal-effect case was also scratched, but some people might not have been too bothered by that. So the central item was a bit of a disapointment to be honest, and the RAOK (Random Act of Kindness) extras that had been put in with it were a bit offbeat - costume jewellery of a type I wouldn't wear, and a lipstick from Lola Cosmetics called VICE in a shade to match - but in fairness people can't be expected to know my taste. 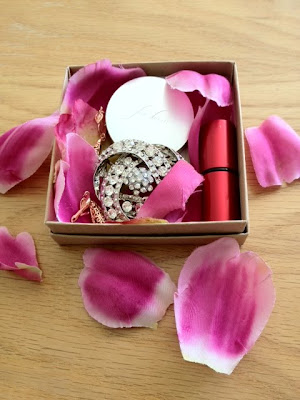 But meanwhile....meanwhile.....there was the wrapping to admire, for this was hands down the most elaborately and exquisitely wrapped swap parcel I have ever received. Gauze and ribbon and petals and miscellaneous haberdashery fripperies and I don't know what. I couldn't help but be impressed. I felt as girlishly thrilled as my four year old self in a tutu. All my misgivings about the evenness of the swap or the wheedling manner in which the deal had been struck fell away, as I plunged my hands gleefully into the sea of petals. And even now I still chuckle about the day I actually received used cosmetics that weren't even labelled as such... 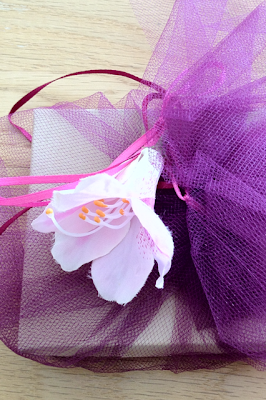 Have you had any less than stellar - or merely downright peculiar - swaps? Do share! Can you beat my all-time most bizarre extra item, a face mask fashioned from sheeps' placentas? For your sakes, I do hope not.


Photo of Venice Post Office from venicebeachliving.com, photo of Christina Aguilera from lovelyish.com, other photos my own. NB I have since tried the blusher, but even on arrival it was obvious that it had been previously used.

Lol! This really had me laughing! I haven´t done any swapping yet but it sounds fun! I do have a "care package" (<3) now coming my way from the UK, so there might be some creative content descriptions there... ;)

I'm glad my tale raised a smile. The swap scene does sometimes have its surprises, it's true, but in my 70+ MUA trades, I have definitely gained access to many niche fragrances that would have been otherwise out of my reach. If I didn't own a single full bottle, the many decants I have squirrelled away through swaps would see me to the end of this life and well into the next, if there is one!

Enjoy your "care package", when it comes. : - ) I must say I am not too fond of the term, though it seems to have stuck. It makes me think of a cross between a hamper in an old folks' home and a first aid kit.

LOL - I ALWAYS put 'used cosmetic samples' on my perfume parcels, so it's good to know I'm not the only one telling that exact whopping porky to the postal service.
Though careful! Now the Posties may have got wind of what we call our contraband.
Shall we all switch to using 'knitted hat' as code for 'stinkies'?

Aha - you are clearly another seasoned swapper, well aware of the conventions of our hobby!

I am very much hoping the Posties aren't reading Bonkers, or I may have inadvertently dobbed us all in it. We may yet need to have recourse en masse to "knitted hat", but while the ooing's good, I'll stick with the closer definition. : - )

I also wonder if the Posties read what we write - the Moth actually thought it was a knitted hat since I send hats off to all parts of the world!

Well, then that's a very reasonable inference that worked in our favour in terms of total obfuscation! Seeing that label still makes me smile... And I can even picture your post office!

It's a great story, Vanessa! Thank you for the smile.

I do not participate in too many swaps if not to count friendly exchanges with blogo-friends. And even there we managed to get into miscommunication because of a different interpretation of the word "decant" (before that exchange I'd never heard 1 ml dab vials called decants).

Wow, that swapper had quite a few strategies to get what she wanted AND counteract any possible resentment through ultra fancy packaging!

I never really got into the swap scene, probably because I'm not too flexible about what I'm after. My tastes are pretty narrow. Also being in London, there are lots of testing opportunities.

So we can post perfume "legally" within the UK from July, but the overseas rules remain the same, is that right?

I think to call a 1ml vial a decant is definitely pushing it! For me a decant starts at 3ml, don't know where I have got that impression but that would be my take on quantity vs nomenclature.

You are absolutely right about the ultra fancy packaging being a diversionary tactic, and boy did it work. That old chestnut "all fur coat and no knickers" springs to mind to describe the package as a whole...

That is right, yes. From mid July we can post perfume within the UK to our hearts' content with a clear conscience!

And yes, the overseas rules are as follows:

This will include a new limit of 24% by volume for alcoholic products shipped abroad, although Royal Mail said it was hoping to persuade international regulators including the ICAO and the UPU to work on raising the 24% ABV limit. The earliest any changes could be made would be 2015, it said."

Oh dear. I'm laughing, but this is exactly why I don't do swapping. :) Such a hassle.

On the word decant: I have to admit that I casually call everything I have to "decant" from a bottle a "decant" and everything that comes from a manufacturer a "sample." But if swapping, I would adhere to the standard nomenclature. :)

It can be a hassle, it's true. I must say that these days I tend only to do reactive swaps, and only respond to offers that really appeal.

How interesting to learn of your own definitions of "sample" and "decant". You wouldn't get very far on MUA with those, as you rightly say!

Glad you enjoyed it!