Bvlgari Jasmin Noir - Out of the Fridge and Into the Fire 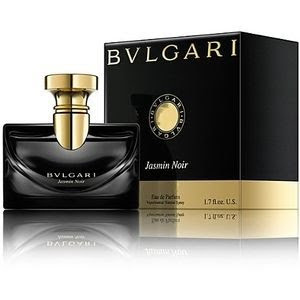 In my previous post I mentioned how the "back row scents" from the LEC chiller were being forcibly excavated to make way for the contents of the defunct kitchen fridge. So on Tuesday, I wore Bvlgari Jasmin Noir for the first time probably since I bought the chiller in June and piled everything into it. That evening, the crisis safely behind us, I snuggled up with Mr Bonkers on the sofa to watch American Idol. Well, "snuggled" is perhaps overstating it, but my head did flop onto his shoulder at one point.

Then last night I was sitting on the sofa on the opposite side of the room, when Mr Bonkers exclaimed: "Whatever it is you are wearing today, it is making my eyes sting!" Yesterday's SOTD was Clarins Par Amour, a moderately strong woody rose, but not so potent as to cause a tear gas-type response some 10 feet away, I wouldn't have thought.

Suddenly, on an impulse, Mr B smelt the sleeve of his sweatshirt and let out an anguished yelp. "That's it - it's on ME! Whatever you were wearing last night has come off on my clothes. My eyes are actually watering - don't ever come near me in that one again."

Oh no, what an unfortunate and unexpected turn of events! And I find Jasmin Noir fairly low key and soft - also on Mr B's sleeve, I might add, for I sniffed it. But for now there was nothing to be done to rectify the situation. Mr Bonkers' distress was so acute, I might as well have doused him in petrol and wafted a lighted match tantalisingly in the space between us.

"Do you know what?" he continued crossly. "Up till now I would have described myself as indifferent to perfume. From now on, I think I am actively anti it!"

So that was definitely a low point in my two year hobby... Of course I had had no intention of stealth perfuming Mr Bonkers in this way, but one thing is certain. As soon as the new fridge is delivered and the perfumes can return to their home, Jasmin Noir is going straight to the back row again... : - (
Posted by Vanessa at 16:57

oh no! Was it definitely the perfume? Sore eyes in this house are usually due to absent-minded rubbing of eye after stroking a cat. I agree with you, Jasmin Noir is hardly a chemical weapon.

Firstly, I ADORE perfume but there are some out there that .... well, lets put it this way - I am on your husbands side!
No , it does not make my eyes smart but I do not like this scent. I feel jasmine is so hard to get right and for me Jasmine Noir is not in my dark cupboard where my perfumes live. I have tried to keep my scent in the fridge but its so crowded > mind you on the really hot days when it gets over 100f I will put my special girls in there - Mitsouko, Jicky and Infini. :)

Hebe - I tend to agree with you, though Lady Jicky has planted a seed of doubt in my mind. Perhaps other people experience Jasmin Noir as more of a sillage monster? Part of me wants to stealth perfume Mr Bonkers with something incredibly bland and innocuous to see if his eyes sting again...

Most of me thinks that's a very silly idea that will only precipitate more "Trouble at' Mill".

Oh no! And he bought it for you too if memory serves?

Very well remembered Farah - he did indeed "custom purchase" Jasmin Noir for me in Germany before it was widely available over here. Another instance of being hoist with one's own petard! : - )

CF, I do so hope this is a one off - meanwhile I shall proceed with extreme caution within 6ft of Mr Bonkers' hyperosmic person.

Poor, poor Mr Bonkers! Hope he recovers and doesn't decide to, um, accidentally drop your JN in the bin...

I am hoping he will forget which one it is that bothered him so much, of which there is a reasonable chance!

Oh dear-- Late to this thread, but what a tale of woe!! Of all the considerations of marital compatibility (covers tucked in/covers pulled loose; butter on the popcorn or dry; love first thing in the morning (never, under any circumstances acceptable)/ any other time of day (just fine, thank you)). Now add perfume tolerance as a Cosmo quiz question!

I'm lucky that my Other Nostril doesn't seem to mind anything I wear, although he clearly like some things more than others. You were just suffering from a bout of sniffles and couldn't smell anything-- maybe Mr. B. is just going through a phase?

It is to be hoped that Mr B is just going through a phase... In fairness to him, when we got together, I wasn't remotely interested in perfume and now I have sprung it upon him. He might equally object if I suddenly expressed an interest in body building or pole dancing - or both!

No nose rubbing first thing in the morning? I will resist coarse quips along the lines of your Other Nostril being congested when he wakes up and needing a good blow. : - )

Ah, yes. "Growing" together. Someone famous once said (and I paraphrase): "Women marry men hoping they will change, and men marry women hoping they won't. Always, they are both disappointed."

Relieved to hear I didn't offend your San Francisco Sensibility...and hopefully not that of other readers. : - )

Ah yes, how true that saying is... Mr Bonkers was complaining only the other day that he is lumbered with "damaged goods" on account of my spate of recent ailments. I pointed out that after 15 years it is reasonable to expect a degree of wear and tear.