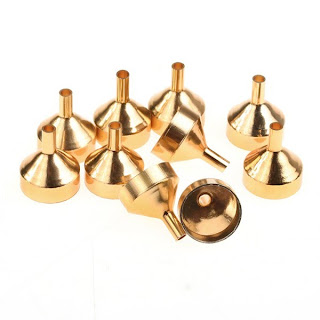 In my recent review of Ormonde Jayne Tiare, I mentioned how the London shop had run out of official samples, but how the very helpful sales assistant was open to my idea of sending them a funnel and a 1ml vial in a plastic bag, which they could then fill from their tester and post back to me in a padded envelope. Which is exactly what they did. I like Tiare very much, I think it is FBW, and I may well buy a bottle one day when I am feeling more flush. My inclination to do so has certainly been reinforced by this excellent experience of customer service from both the initial SA I spoke to and the colleague who actually did the business while she was on holiday.

Following several fruitless inquries over a six month period about the availability of Havana Vanille samples from one of the London branches of L'Artisan Parfumeur, I decided to propose a similar strategy to them. When I first suggested sending my own decanting supplies to them, the SA who took my call said that that would not be possible, as they are not allowed to tamper with the mechanism of the testers. Thinking she might have imagined I had one of those refillable Travalo atomisers in mind, which attach directly to the pump mechanism of the bottle, I reassured her on this point and explained that it would be just like spraying normally, but into the funnel and my 1ml vial rather than on skin.

The SA immediately countered by saying that that wasn't "the sort of thing we do". Well, I don't suppose it is, any more than I imagine the girls at Ormonde Jayne are often called upon to decant into empty vials using the customer's own equipment. I can quite see how it could come across as an unorthodox request. But the point is that while the staff at Ormonde Jayne were receptive to the notion and viewed it as a somewhat convoluted sales opportunity, the SA at L'Artisan didn't wish to accommodate me by complying with my strange suggestion.

She did, however, say that she would put my name down on the waiting list for the next batch of samples. The thing is, I have had my name down on this list since the autumn - or possibly even late summer - and if more samples have come in since then, I can only conclude that they went straight out again to personal customers or people higher up the list - who knows? Thinking about it, I have never been on a waiting list for samples and actually received one from any perfume store/house I have had dealings with, so this appears to be a general failing. Now if they have samples in stock, that is a different matter - Ormonde Jayne, L'Artisan and Miller Harris have all been very prompt to send samples when they have them at the time of my inquiry. 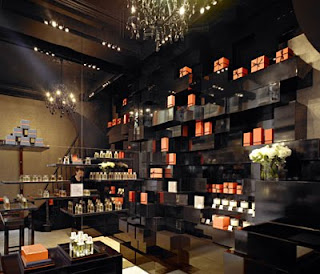 So maybe L'Artisan think I am just an oddball, which I wouldn't particularly deny. Mind you, they have had two bottles of Premier Figuier off me in the past, so it isn't as though I am one of those fly-by-night fumeheads who is always on the scrounge for samples but never makes a FB purchase. And I was especially curious about this particular scent because it is by my newfound hero, Bertrand Duchaufour! : - )

But maybe I will receive a sample in the next couple of months after all. The thing is, by that time I might have fallen in love and purchased a bottle of something else that I have been able to try in the meantime... And it might very well be Tiare.
Posted by Vanessa at 18:46

I found the SAs in Ormonde Jayne's shop to be absolutely charming and helpful. I fell in love with Tiare and just ordered my full bottle. I also loved Havana Vanille, and have been wearing it a lot this winter.

That silly l'Artisan SA is making you NOT want to shop there, eh? Even if you do love their products. Your article should be sent there way, so that management can see how well they're training their SAs.

The l'Artisan shop in our city is lovely. Very helpful, friendly, accommodating.

No worries about the Havana Vanille....I'll send some your way whether l'Artisan likes it or not!

I would not hold my breath here in Australia for samples!
Some places make you buy them and some just keep them locked up in the draw (I know they are there - seen them when they open it quickly) and the SA 's give them to their girlfriends or themselves.
They would sell more if the gave them away but.... they just don't care! Service is not a work Australian's are good at honestly!

Oops! I mean "not a WORD Australian's are good at honestly!" ....
late here and I should go to bed ! LOL

Hi Krista - you are living proof that good service can lead to full bottle purchases!

Thanks so much, Lovethescents, for stepping into the breach and offering to send me a sample of Havana Vanille. Gratefully accepted... : - )

Lady Jicky, sorry to hear that Australia doesn't have a very strong service culture. It seems self-evident to me that giving out carded samples boosts sales.

I was a little surprised when I was sniffing at Barney's that the SA pumped samples into sweet little jars with black screw tops for me. I guess those really nichey houses don't make samples, and they had to do something about it.

Why House of L'Artisan wouldn't stand you for a few squirts is beyond me. (It seems so environmentally correct-- you brought your own bottle!)

On-site pumping is exactly what we want! How enlightened of the SAs at Barney's... As you say, how hard can it all be when I offer to send them the kit?

Would l'Artisan be properly embarassed if you told them that _Sephora_ will decant a sample on demand and that they provide the atomizer, too? I assume that they consider themselves fancier than Sephora.

Very good point, CF, and I have a great story of my own about the Sephora branch on the Champs Elysees in Paris. I was on a mission to get hold of a sample of Ego Facto's Poopoo Pidou for Lovethescents, who likes a good rice note, and the SA said that if I came back the next day with a vial of some kind I was welcome to make my own sample - they didn't have any atomizers left at that time. So next day I returned with a specimen bottle(!) purchased from a pharmacy and the SA and I duly decanted a ml or two into this rather unorthodox receptacle. That's what I call thinking outside the box on both our parts!