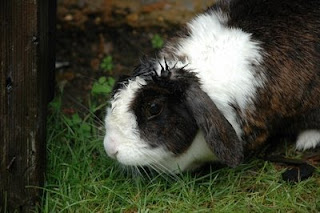 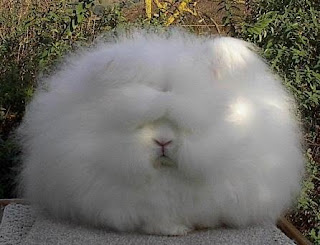 I took the cat back to the vet today. She has been suffering with her ears since Christmas (much like her owner!). There was a nasty infection, topped off with a polyp on her ear drum, which was thought to be benign, but needed daily treatment. The vet had a look and said I had done "a brilliant job" over the past month of removing brown gunk and administering antibiotic ear drops, and that the polyp had disappeared! The cat now hates me, but she has a clean bill of health, apart from being slightly puritic. I said I feel pretty puritic most days, but apparently it means "inflamed", not a "non-specific modern malaise".

Anyway, when I arrived at the vet's, the cat was yowling piteously in her carrying case. A man sitting across from me smiled sympathetically and remarked: "Mine does that." "It does?" I replied. "In that case, did you just bring a box in here, as it is awfully quiet if there is a pet in it?" He laughed and explained that the box contained rabbits.

In a few minutes, the rabbit owner was called in ahead of me, and as the vet closed the door behind him, I heard him say brightly: "So we've got Spikey and Fluffy in for castration today, have we?". I couldn't help smiling at the incongruous juxtaposition in that sentence. And it wasn't long before my mind turned to perfumes, and which ones I would characterise as "spiky" (losing the "e" probably), and which as "fluffy"....

By "spiky" I think I mean something along the lines of austere, craggy, cold, uncompromising and complex, and the fragrance family that most readily springs to mind is the classic chypre, but this is a pretty fluid and subjective definition all the same. As well as "oakmoss", which comes off as particularly spiky to my nose, individual notes such as iris, leather, incense, cedar, carnation - and spices and resins in general - all have the potential to be prickly in the right setting.

By "fluffy" there is firstly the notion of comforting and feminine and cocoon-like, and also a wider connotation of "feminine" in a ditzy, girly, pink way. : - )

Here goes - I am sure I will think of more presently. Please feel free to disagree with any of these and to make counter suggestions!

See how "spiky" is dominated by niche scents? I guess because it would be tough to sell in at the mass market level.

Worth inserting Mark Constantine's own take on this one:

"Keep It Fluffy is a wonderfully smooth, comfy fragrance; it combines many comforting notes in a warm embrace. Smooth, natural, sophisticated vanilla and rose absolutes compliment the subtle musk base. Soft and gentle Keep It Fluffy wraps you up in a pink cloud and gentle caresses,"

I'm not even going to go there, but there are an unseemly number...more of the generic girly pink variety, mind you, than the "powdery cocoon" type, properly speaking.
Posted by Vanessa at 14:25

I wanna rabbit! Fluffy fragrances...hehee...I think you nailed it!

My only question is why Guerlain is categorized as niche in spiky but designer in fluffy?

That's a very good point, and the reasoning was that Idylle is positioned and marketed in a similar way to other designer scents with gift packs with lotions etc. Even though Mitsouko is also in mainstream distribution, it doesn't "feel" like a designer scent, and its heritage places it in niche, I felt. But it is all very debatable!

What a great addition to the scent lexicon!! It's my contention that language is continually needing to be "bent" to create a true vocabulary for scent. After all, we have ways of describing all sorts of things-- but for some reason, there just aren't a lot of good words for scent.

"Fluffy" I get straight away, and I know quite a few of your designated "fluffy" scents. "Spiky" not as many, and it's not quite as intuitive a concept for me, but I will look into finding them and think about what you said as I smell.

Cheers, and good on you for getting the cat back in the pink!

I so agree about Bandit being a spiky! I can't wear it and I think its because its spike is waaaay to long for me! LOL

Champs Elysee by Guerlain is a fluff but not in that same way many of those celeb scents are sugery sweet and yet many of the so called celebs IMO aren't anything like "sweet innocent things" they like people to believe !
Bunch of tramps many of them! LOL

Wouldn't you love to know what the bunny owner would have thought if he knew his gang would create a blog topic on scent! LOL

LCN, I agree that "spiky" is the more nebulous concept of the two, and will mean different things to different people. I will keep trying to refine it as I sample more things in that general vein.

Lady Jicky, it would be funny indeed if the bunny owner knew what his pets had inspired!

But, sure, when I saw the word craggy, spiky started working for me.

"Craggy", prickly, tetchy, acerbic, austere, that sort of thing may get your associative juices going!