The Flight of The Flacons - Rehoming the Dairy Product Diaspora 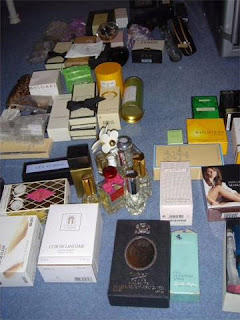 I know what you are thinking - that is rather a dramatic title for a post about anything, never mind one about the kitchen fridge packing up. But this latest domestic crisis has really rattled me, and epic Wagnerian language felt apt. To give you an idea of how stressed out I was by the demise of the fridge, I rang Vodafone this morning and explained that my phone wouldn't let me dial calls out. The customer service rep got as far as ordering me a new SIM card when I realised that the reason the phone wouldn't make calls was because after dialling a number I would hit the hang up button instead of the call button. See what happens when you lose your sense of smell for as little as four weeks? Whole sections of your brain turn to jelly beans, that's what happens.

So yes, I was very shaken by this incident. Yesterday I defrosted the fridge, as I do every few years at least. This involved removing the top shelf, which was stubbornly embedded in a small glacier, then dropping the whole freakish ice sculpture-shelf ensemble into the bath before waiting for global warming to do its business. This took all day, and when I turned the fridge back on last night, only the light came on, but there was no cooling action whatsoever.

A malfunctioning fridge is especially disturbing to me, for as a former brand manager of a chilled foods company I am painfully aware of the optimum temperatures at which food should be kept. Luckily the weather is still quite chilly, so I immediately packed up the most vulnerable perishables in two cooler bags with freezer blocks in the base and put them outside in the garden. This included the remains of Mr Bonkers' curry, and in the frosty atmosphere engendered by the miscreant appliance, a spirited discussion ensued between us about the likelihood of his leftovers being consumed by foxes in the night. An uneasy truce was eventually reached, on the basis of any animal predators' likely aversion to garlic.

Meanwhile, the milk is currently taking its chances in the utility room, along with a box of eggs, some carrots and a bottle of ketchup (which as you and I know is one of those foods that manufacturers have scared us into keeping refrigerated, but which used to live quite happily in the pantry when we were young). And anyway, the utility is pretty cold for a habitable room. Or a pop-in-and-out-of-able one, for you can barely swing a venting kit in there. Also, following the phone gaffe, when making a cup of tea now I am consciously trying not to reach for the Stergene, which also comes in a matt white bottle. (Opaque receptacles again - they are so slippery!)

This morning, after a couple of phone calls to Whirlpool and local service engineers, supplemented by a spot of due diligence work on the Which? consumer site and a live messaging session (my first in a business context!) with a lady at Comet, I bit the bullet and ordered another fridge, more or less identical to the one that has whirred its last.

It will, however, take a little while to come, so the realisation soon dawned that in such a home emergency, curating one's perfumes in a fridge amounted to a decadent luxury. So I have removed my fragrance collection from its LEC chiller and laid it all out on the floor, in groups equating to each shelf. My word - I didn't half pack a lot in there!

When the temperature comes down to 5 degrees, I will transfer the dairy product diaspora from the garden and the utility to its new temporary home. The bottles, decants and bags of samples will just have to stay on the carpet, now transformed into a sprawling refugee camp. The bedroom is unheated so I daresay they will live.

Yes, it has been a traumatic day, but one good thing that has come out of it, apart from the obvious convenience of being able to hold midnight feasts in the bedroom without going downstairs, is the fact that a whole bunch of "back row" scents are seeing the light of day for the first time since I bought the fridge in June! I'm looking at you, Jasmin Noir...
Posted by Vanessa at 15:42

oh dear me - I am truly sorry for laughing so much at your misfortune, or rather your description of it. Do not let Mr Bonkers put his leftover curry into your perfume fridge, what if the smell lingered?

As an ex-telecomms person I howled laughing at your call to Vodafone. I am so glad you have your sense of smell fully back now and I hope your new fridge arrives promptly. Great excuse for a few nice meals out in the meantime!

oh my goodness - I am soo sorry but you had me laughing so hard!! Thanks for making my very tired and head-achey-from-learning-new-things-at-my-new-place-of-employment day!

What a story....at least the weather's still cold!

He, he - I can understand your phone problem.I sometimes get into same types of situations. :) Hope the fridge arrives soon!

Thanks for your good wishes, chaps - the new fridge will be installed next Thursday, and meanwhile the perfume beer chiller in the bedroom is full of food! Mr Bonkers was made to eat his leftover curry though, for Hebe made a good point about the very real risk of odour contamination... If the foxes didn't care for the garlic aloo chat, I don't see why Chanel and company would be mad for it either.

This is a great story-- so vivid-- I can see it all... I never thought of keeping my perfumes in the fridge-- I can see the logic for and against it, as your story makes so clear. (Un) fortunately for me, our fridge is taken over by my Other Nostril's obsession: his ever-expanding wine collection.

I got the fridge notion from the Osmotheque museum in Versailles, who curate most of their scents at 10 C and the citrus ones at 4 C. It does extend their shelf life, apparently, though probably not enough, given the woefully slow rate at which I am using up my collection. : - )

Oh, my goodness. That's an impressive floorful of perfume there.

We've discussed getting me a little fridge for perfume, even a non-vibrating... er... some-nonvibrating-technology fridge. But the non-vibrating fridge that Himself got for wine made such irritating noises that it got sent back. So no perfume fridge for me yet.

I spotted a Rosine box!

CF, I have to admit that the perfume fridge does shudder and whirr a bit intermittently, which seems to go with the territory. It is best placed in a room where the noise wouldn't bother you, either because you weren't in it or were wearing ear plugs. : - )

To my shame I have a further two drawers' worth of FBs, decants, minis and samples that didn't make the cut when it came to deciding who got refrigerated and who didn't. I tell myself I will prioritise the ambient, theoretically more life-limited scents when deciding what to wear, but I rarely do! I have stopped acquiring stuff now, more or less...or that is my fervent resolution for 2010!