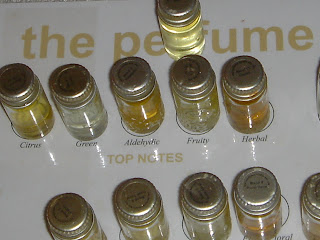 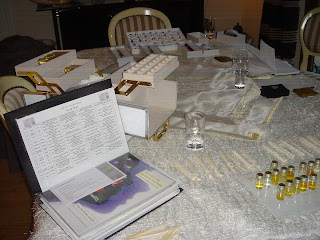 In my excitement over the Ivana scent sighting, I omitted to update readers on Thursday's pointy stick procedure. Although painful, it was a rip-roaring success - "roaring" being the operative word - for the world seems eerily noisy now. The keystrokes on my PC sound like castanets and the traffic outside my window is frankly deafening. Additionally, my sense of smell has been fully restored to its previous sketchy levels, so yesterday afternoon Mr Bonkers' mate Beet (sic) and I set off in good heart for our perfume workshop.

It was hosted by a lady called Vicky, who is a franchisee of a company called The Perfume Studio. As well as offering small, private consultations such as ours, she organises larger parties, including corporate events. We sat at a huge table in her dining room, which was covered in a feathery white cloth, immediately creating a relaxing, spa-like ambience. Her supplies were stored in a white concertina-style chest of drawers, and the 18 blends we were about to try were placed at the head of the table.

Taking the blends (or accords) in turn - and starting with those which were options for the top notes before moving on to the heart and base - she handed us freshly dipped paper strips for each one, asking us to sniff them one at a time and tell her what scenes or memories they evoked for us, ideally without looking at the name printed on the reverse!

The four base note blends were: MUSKY, WOODY, BALSAMIC and MOSSY.

We both found it harder than we thought to identify notes in each blend, and despite the fact that I sniff perfumes every day for fun, I dropped some real clangers... In the case of Citrus (the very first blend we smelt), I detected lime, whereas it turned out there was pretty much every citrus fruit BUT lime in it. : - ) In the case of the Green blend, I envisioned a walled kitchen garden, and Beet got a wood or an orchard, so we weren't too far off conceptually there at least, but we had no clue what was in it. I was on the ball with the Gentle Floral accord though, detecting freesias straight off, and my finest moment was spotting tonka bean in the Balsamic blend - the first client ever to do so, apparently!

I also insisted that the Spicy blend smelt "just of flowers", which foxed our hostess for a moment until it was established that she had given us the wrong touche by mistake. But, these small flashes of accuracy notwithstanding, overall I was pretty rubbish at the note-guessing game, considering how much of a workout I give my nose, and was scarcely more accurate than Beet, who just splashes on cologne occasionally like a normal person. It was tremendous fun though. As we completed our sniffing in each of the three main groups (ie top, heart and base), we discarded the strips we didn't care for so that by the end of the exercise, we had a more manageable number of blends from which to compose our masterpieces...

Between us, we used 12 of the total of 18, deffing out FRUITY, FLORAL FLORAL, FRESH FLORAL, ROSE FLORAL, OZONIC and MOSSY. The Mossy one comprised patchouli, oakmoss and a few other interesting bits and bobs, and if I had just had the courage to blend it with the musky-woody Musky blend and the vanilla-containing Balsamic one I might have ended up with my very own knock off of PG L'Ombre Fauve, but I bottled it - in the sense of chickened out, that is - for it struck me as too high risk a strategy. Added to which the deal was that we should pick at least ONE blend from each group, with no limit to the maximum you could have, so my L'Ombre Fauve pretender would have required a distinct bending of the rules.

When we had selected our shortlist, Vicky went away and made our chosen blends up into the finished perfume, in more or less equal ratios (the blends already included the correct ratio of alcohol). I chose seven: two top note, two heart and three base note, whereas Beet went for nine in total in a three, three, three formation. Had either of us been football fans, we might of course have been tempted to go for a more familiar four-four-two formation. : - )

I got to choose one of a range of prettily coloured metal atomisers (I picked apple green), while Beet was assigned a very manly atomiser in graphite grey. Men get 30ml, women 20ml, because the women's fragrance is EDP versus the men's EDT. Inside the presentation box was included a white feather, spritzed with our new creation. Oh, and we had to name them ourselves: I chose "Charleston", which I associate with secret walled gardens glimpsed through wrought iron gates, while Beet called his cologne "Voodoo", on account of the remarkable black art by which he had arrived at it.

Here are our basic compositions - for mine I took more complete notes on the precise components of each accord:

Now I know that that looks like an awful lot of separate notes, but it doesn't smell anywhere near as busy as it reads on paper! I would characterise Charleston as a soft, green floral, a sort of hybrid of Diptyque's Ofresia and AG Eau de Camille or Chanel Bel Respiro, if that doesn't sound too grandiose a comparison. Just as Eau de Camille has syringa and greenery, and Bel Respiro has hyacinth and greenery, so this Green blend - which sets the tone for my composition - has hyacinth and greenery too (well, green things, anyway, to use the term "greenery" in its broadest sense). It is a flat but decisive "greenness". Modern and stylised as opposed to the life-like thicket that is MH Fleurs de Bois. Other green scents which flitted into my mind as having a similar modern feel to their greenness - though not the same notes - are: DSH Cyan or Celadon, and CdG Calamus. Oh, and there is a shedload of tea in my scent, as you can see....much of it green, indeed.

HEADY FLORAL (as above)
SPICY (the full Christmas pudding - opoponax, clove, you name it)
TONIC SPORT (another herbal, astringent, "male cologne" accord - with ginger?)

Beet's smelt like a more feminine version of Habit Rouge EDC, ie more floral - but also more herbal - though still very classic. It did not smell like a designer men's cologne at all, but instead it came off as positively Guerlainesque or Caron-like, which I attribute to his cunning choice of ALDEHYDIC. He was more daring than me in his combination of blends, and is the hands down winner in the originality stakes!

Beet's scent has also set me thinking how mine might have smelt if I had substituted the Aldehydic blend for the Green. Rose, jasmine, citrus, gentle and heady florals, balsamic woody base....I might have come up with my own take on my all-time favourite, Guerlain Plus Que Jamais. Mind you, at the time of the workshop, I had discounted the Aldehydic blend because it smelt quite potently fizzy on the touche, however, as Beet demonstrated in his composition, sometimes an ingredient that isn't terribly compelling in isolation can add something really special to the overall result. Like an egg in a cake.

In hindsight, perhaps a refinement of the creation process might be to make small samples of a shortlist of compositions - what I believe are known in professional perfume circles as "iterations" : - ). I guess the hostess would have to limit clients to one or two options tops, or the process could get totally out of hand with people failing to make up their minds. After all, I am called Flittersniffer for a reason.

As things stand, it is quite a leap of the imagination for the average participant to go from half a dozen scent strips to the finished article, whereas when planning a fragrance purchase one would live with a sample for a while before buying a full bottle - in theory, anyway. So this is a bit of a blind "buy" in that sense, though the uncertainty as to how the end product will turn out is also a huge part of the fun, so I am undecided on this point. And any provision for intermediate samples would need to be carefully managed so the whole process wasn't hopelessly derailed.

But if I cannot contain my curiosity, I can always purchase another voucher so I can go back and make the "Guerlain that got away"...
Posted by Vanessa at 13:52

ooh how envious I am - that sounds so lovely!! Thanks for sharing!! (and of course, I would love to have sniffed your created scents)

It would have been fun to get your take on our creations, for sure. Mr Bonkers was his usual disparaging and inarticulate self, though I guess we could take his comment: "Sorry, but it's all just like the stuff you normally wear" as a backhanded tribute to the standard and quality of our work.

Sounds like you had a wonderful time. What an exciting account of it all! Thank you for sharing and I'm sure we all wish we could do one of these together some day :-)

Definitely choose to see that as a compliment!

Yes, it was a blast - would definitely recommend it!

Oh, that just sounds like so much fun!! (And I'm so glad to read that all is restored in the sniffing department.)

My Other Nostril keeps poking me to "design" perfume-- like I even know what that means!! (He's always doing this-- I like shoes. "You should be a shoe designer." I like baseball. "You should be a sports writer." I think he's just trying to get me out of the house...)

Anyway, now I am completely inspired!! I think there are similar classes in the bay Area-- if I catch a glimpse of one, I'll have to sign up.

Oh yes, LCN, do avail yourself of any such opportunity in your area. It is worth the money for the sheer enjoyment of participating, never mind that you get to take your creation home with you in an attractive - albeit opaque : - ) - receptacle!

And I know what you mean about well meaning friends and relatives conjuring up all sorts of alternative careers for you based on a passing interest. If I had a pound for every person who said I should turn this, that or the other of my life experiences into a novel, I would have as much money as a successful novelist, without even having to write the book. Though I must say no one has yet suggested I open a restaurant.

I've done this- received as a birthday present which I loved. I ended up with a quite gingery but light scent- unusual apparently. I really enjoyed the whole experience.

Hebe - so sorry your ingredients didn't live up to expectations, whereas Rose's creation sounds delightful! Am thinking a Comme des Garcons 1 or 3 kind of vibe...

I have since learnt the identity of the perfumer behind my particular experience package. I won't say who it is in case that is proprietory information, but when I googled his name, I found out that Luca Turin rates him highly, and the blends certainly smelt as though they were composed of quality ingredients - as do Rose's.