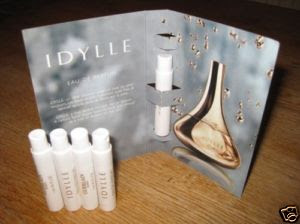 In choosing the title for this post, I could have said "perfume atomisers", as these are the receptacles which bother me most - I am thinking specifically of the little spray vials you get in carded manufacturer's samples. However, my bottle of Creed Love in Black is also opaque, as is Love in White, though I don't have that one. My Bal a Versailles is in a white and gold bottle, and other opaque brands I can think of are Keiko Mecheri and Juliette Has a Gun, though I don't own anything from those lines either. Several of the Bond No 9 line are in opaque bottles as I recall, not that I would be especially tempted to buy any of them even if they came in clear glass with measurement markings printed down one side. And there are doubtless many more examples of the phenomenon - Habanita by Molinard just popped into my mind, also Tom Ford, Narciso Rodriguez and the Piguet range.

What prompted this "rantlet", for in all honesty the opacity thing is more of a "scent niggle" than a "crime" as such, was the fact that I wore a sample of Guerlain Idylle the other day from a little white vial, and couldn't work out how much was left in it. I shook it a few times to try to work out the remaining level from the noise it made, but with so little in there to start with you can't really deduce much by sound alone. And this also begs the question: when I bought a job lot of six of these vials from an Ebay seller, were they in fact all full to start with, as stated?

Going back to my Creed bottle, I have swapped and given away a few decants from it, but if I were ever to swap or sell the remaining bottle (offers welcome, by the way!), I wouldn't have a clue how much is in there to put in the description of the item. Which - with such an expensive scent - is pretty fundamental information. Holding it up to the light doesn't help, and the shake test only suggests there is "quite a bit still in there". So if anyone wanted to carry out a series of "fill level scams", opaque receptacles are definitely the way to go!

I am sure I have seen a bottle - possibly a men's one - where the front and back were opaque, but you could clearly see the fill level down the sides. So that is not a bad compromise, if you must do opaque at all, and personally I favour translucent every time.

I also think that opaque bottles/vials look cheaper somehow - not the Piguets or the Tom Fords particularly, but those JHAG ones look a bit basic. They could quite easily be Aussie shampoo...

So as with politicians' expenses and perfume reformulations that are sometimes slipped past us as soon as our backs are turned, when it comes to the the design of perfume bottles and vials I would like to call for greater transparency!
Posted by Vanessa at 14:18

I know what you mean! It's so frustrating as you hold an almost opaque bottle up to the light and try to work out how much is still in there.

Narciso Rodriguez for Her is one that I think is opaque but with clear sections that you can see the remaining juice in. I would check my bottle, but it's two flights of stairs up.

Hi Pip,
Two flights of stairs sound like way too much exertion, even in the pursuit of factual corroboration. All right minded people should be half way down a family size bag of Doritos and a bottle of red at this time on a Saturday night. So I am quite happy to give NR for Her the benefit of the doubt on the basis of your hunch, and good for them for incorporating a "visible perfume line" into the design...
: - )

You're so right and it's a swapper's nightmare. I appreciate CSP, for example, because although the bottle is opaque, the atomizer is verrrry easy to unscrew. Thanks CSP!

Another considerate company...which also gave me scope for yet another DSH-ism (see previous thread)!

"Rantlet"-- Ha!! Well, now you've given me something new to think about-- I never noticed/thought about this particular issue. As you say it probably doesn't raise to the level of crime-- I thought "dab vs. spritz" was the major question for our time. But now I realize that a clear or mostly clear roll on bottle is my ideal delivery system.

"Dab vs spritz" is indeed one of the major questions for our time, but this issue of transparency snuck up on me lately. I agree that "mostly clear" is also okay, as in "frosted" or "not totally obscured by labelling". And the "visibility panels" of which Pip speaks represent an acceptable minimum.

Mots important to me is rather: Did you like Idylle?

Oh yes, I did, though only on the second trial. I would put it in the Lovely/NR for Her/JHAG Lady Vengeance category and plan to include it in my top picks for 2009, which I shall be writing later today with any luck!

I LIKE opaque bottles! I may be deluded, but I don't feel too anxious about having the bottle out of its box, if it's opaque. I particularly like the Piguets and Bal a Versailles, and couldn't imagine them any other way. To be a complete pedant, though, I'd probably say that -- white and black aside -- I don't like COLOURED opaque bottles, as in that nasty red Boss one and Creed's hot pink Spring Flower. Just tacky!

A receptacle that stands out for me, of course, it the Rive Gauche 'can'. I love its chic minimalism.

PS Idylle hs grown on me, too.

TS, coloured opaque bottles can be nasty, granted, especially that Spring Flower one! And I am sure you are right to point out that opaque bottles may afford better protection against heat and light.

I know what you mean about the Rive Gauche can, which I had forgotten. Though I have now also remembered the lovely and silverly opaque thermos that is Kenzo Power.

I tend to like non-ugly opaque full bottles, because most of the reasons for disliking them don't apply to me:

- I don't swap or sell. (Postal Regulation Phobia.)
- I never ever use up a bottle.

And "I never use up a bottle" makes the reason for liking them more important:

- Opaque keeps light out of the perfume, so I assume it'll age better.

The light thing is an important point in their favour, I see that now.

But any seasoned swapper will tell you that opacity is a real nuisance, if not precisely in those words!

How interesting! I adore my opaque plain white bottle of CdG (perfume not airport!) Sherbert series: Rhubarb. One of my favourite perfume memories is holding the cold bottle in my hand after unpacking it, completely undistracted by the colour of the juice. I still don't know what colour it is!

If you could get someone to weigh an empty bottle you could always roughly work out juice remaining by weighing the bottle? Inefficient and annoying. My only worry with my Rhubarb is that I won't be able to see when to replace it...

"CdG" - not the airport! Haha, another excellent DSH-ism for the list...

Weighing the bottle is indeed a cunning ruse, assuming access to an empty one, and a good head for fractions. : - )