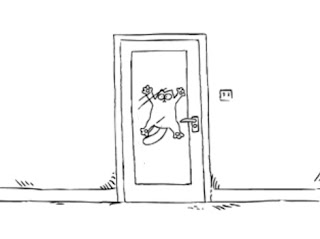 Since Christmas Day I have been suffering from blocked ears and sinuses. One ear is so bad that it constantly booms, and when I eat, it sounds like a ballet of twelve JCBs in my mouth, which as anyone from round here knows, has actually been performed. On Wednesday, heartily fed up and having tried a futile and mimsy succession of remedies involving drops of one sort or another, I am seeing the doctor again. It is my intention to lie on his couch and not budge until he has done his worst with A Very Pointy Instrument.

During this time, I have also noticed that perfumes are behaving oddly on me - they are not mutating through the usual sequence of top, heart and base notes in the expected time frame of 20 mins, 2 hours and up to 8 hours respectively. Instead, right after I have applied them on skin, all scents are going SPLODGE SPLAT, before dissipating within a few minutes into an indeterminate blur, which is more akin to the scent's drydown if I had to place this mess.

I am quite chagrined at the turn scent events are taking. Suppose you went to see a play and instead of a Prologue and Four Acts, for the same ticket price you just got the last half hour of Act Four. You would be confused, wouldn't you? - and struggle to pick up the plot. And you would probably want your money back.

Now, I cannot say whether this disappointing telescoping of scent development is attributable to my present ear problems or not. I think I can still smell - but maybe I can't. After the doctor has done his worst, I should be in a better position to say, one way or the other.

But what is slightly troubling is the thought that this SPLAT business may in fact be a permanent shift due to my changing hormones. I do have an acquaintance who is roughly the same age as me, about whose Venus Fly Trap skin I have often joked, without it ever occurring to me that I might be like her down the line. For this lady's skin used to grab the top and heart notes sharply by both lapels and ingest them instantly, before allowing the base of a scent to linger a while in a somewhat dazed and confused state. Much like this Ferre by Ferre EDP I am currently wearing, in fact. Two minutes after application, it is anybody's guess what is in it, though I know for a fact that iris is a key note somewhere, leading some people (though not me, even with my previously intact faculties) to dub this the Poor Man's Iris Poudre.

This possible association with the menopause is rather worrying, for it is a process that may take some time to run its course - 10 years or more, according to people I have spoken to - and I am just off the starting blocks. My extensive reading on the subject has uncovered a plethora of unpleasant symptoms, most of which I have experienced, but there doesn't seem to be an official listing for "Perfume will become prematurely indistinct on skin", which to any perfumista is of equal if not greater concern than the flushes, insomnia, mood swings and dry skin.

I simply couldn't be doing with this SPLAT business for the rest of my 50s or even beyond, so for now I am putting all my hopes in the doctor's pointy stick.
Posted by Vanessa at 15:28

So sorry about your ear; hope the sharp pointy tool does indeed help.

Ears and nose are pretty definitely related (says the kid who missed forty, yes, 40! days of kindergarten with ear infections before her tonsils were removed). Don't panic yet! Hope you're feeling better soon.

What a rough time you had with your ears as a kid, and thanks for your good wishes! My reading on the Internet (which I know in itself can have fatal effects) suggests that diet, as well as long term use of antibiotics and other meds, may be factors behind these recurring ear/sinus problems. We shall see...

As Mals said, ear and nose are related. Your sinuses are congested so your sense of smell is altered. Just give it time, when all is drained, you'll be able to get back in the sniffing game!

Thanks, Lovethescents - you are that handy combination of perfumista and medical professional! : - )

I'm here for your, sistah

Just to echo what others have said-- I think you have every reason to believe you'll be back and sniffing fine in no time. I am aware that loss of smell can happen to *some* people as they age-- I have a good friend who can hardly smell at all anymore-- but the process is verrry gradual-- it took her about 10 years to get where she is today.

I am very much hoping that our olfactory endings fall into the "use it or lose it" category rather than "use it until it wears out" category. Heaven knows I've been giving my nose a workout...

Oh, LCN, I do hope it is the former scenario, the one they apply to minor railway lines and sub-post offices over here. By the same token, I should probably turn the computer off occasionally and shake a leg or two...