What A Lovely Surprise! He Thinks I Smell Nice - Wearing Perfume... 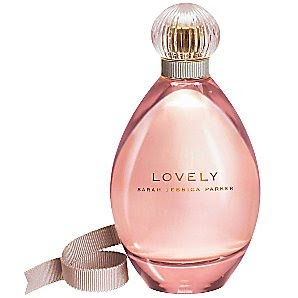 Still suffering from this painful blocked ear, and nearly didn't bother wearing perfume yesterday, then thought a dab or two just might cheer me up. So after a bath I applied the remains of a tube of Sarah Jessica Parker Lovely scented body lotion, sprayed the EDP on top and, freshly anointed, went downstairs into the living room, where the conversation went something like this...

Me: "Now you smell this, because it is a perfume I put on about this time a year ago and I am sure you said you quite liked it. Possibly because you couldn't smell it?"

Him: "Well, that's funny, because just as you walked into the room I was going to say that for once you do actually smell nice."

I proffered my wrist.

Him: "Yes, okay, it is a bit faint, but it smells of an expensive soap."

Which all figures really, when you think that my partner liked the fragrance of Heyland & Whittle Tea Tree soap on my hands, and has submitted to the recent soap gentrification programme more compliantly than I could ever have hoped for.

Now SJP Lovely is classed by Osmoz as a "floral woody musk", so maybe I should try him with a few more in this family? What he appears to be picking up on as "soapy" is what I would indeed call "clean and musky", as I don't generally like perfume that smells "soapy" in that aldehydic, sneezy way. Anais Anais is a case in point, or Serge Lutens Fleurs de Citronnier, which I so wanted to like on account of its pretty name. I also don't care for fragrance that smells soapy in an out-and-out detergent sort of a way, such as the new Byredo Blanche or L'Artisan's L'Ete en Douce - I agree with Luca Turin that the latter is "laundry-soap-on-steroids".

The funny thing is that SJP Lovely was the first full bottle I bought after this perfume hobby took a hold, so as far as my partner is concerned, I could have stopped right there! Well, Lovely is nice, but no more than "nice", and sometimes you want to smell of something a little more dangerous than soap...
Posted by Vanessa at 15:23

Wow!!! Victory!! I'm thrilled Mr. Bonkers likes something....I would, however, proceed with caution. Maybe continue in Lovely for a bit before heading into niche territory. Give him a chance to ease into this slowly. If he's only just started enjoying plain rice, don't go pouring curry all over it! Let him try Prada's l'Eau Ambree, maybe, or Montale's White Musk, or even SL Clair de Musc. Spread these out over a long period of time with helpful Lovely at intermissions. Good luck and less us know!

Oh, that's Very Interesting. Himself doesn't like perfume much either, and I've been considering your soap scheme - if not as something he'd like to wear, which will never happen, instead as something he might like on me. Though he tends to lean more toward the vanilla side of the scent world.

As another possibility, Ivoire does seem to smell like a good soap for a long part of its development. But not at the beginning and the end, which might break the spell.

Hey, LTS, love the image of Lovely as plain rice... To my nose Amouage Lyric would be curry then, haha! Slow and steady it will be, with "helpful Lovely at intermissions". : - )

CF, I think I remember reading that your other half wasn't overly enamoured of perfume. Mine will never ever wear the stuff, so it is indeed just a question of getting him to tolerate scent on me. There are some pretty, soft vanillas your chap might like, though maybe that is not your cup of tea?

Funnily enough, I nearly put Ivoire in my list of disliked soapy scents above. Actually the soapy aspect is the least worst bit of it to me. Ivoire (which I know is a great classic and which I have tried numerous times to bond with), reacts horribly with my skin and is best described as "urinous saddles" for a good part of its duration - quite possibly the middle as you say!

I like some scents containing vanilla, though he and I have yet to totally agree on one. Every purely vanilla scent but Tihota smells plasticky to me, and he dislikes many of the vanilla-as-a-note scents.

Excellent news! I love your wording of wanting to wear something "more dangerous than soap".

Sorry about Ivoire, CF, and believe me I did try...

How are you and Himself with JM Vanilla & Anise, which nicely sidesteps the plasticky / foody angle by featuring the vanilla orchid rather than the pod?

Ah yes, Hebe, for in my experience soap is only dangerous when you slip on it or get it in your eye. : - )

Hmmm. I remember that I didn't like Vanilla and Anise enough to consider buying it, but that may have mostly been about Not Enough Anise. If Himself likes it, then it doesn't matter as much if I do. That is, if he likes a perfume that I don't dislike, I'll buy it!

Oh, I feel the same about Mr Bonkers! I wouldn't wear Lovely every day, though, but I might wear it more than once a year from now on...

I would love to know how Vanilla & Anise might go down with Himself. I have a friend who goes scentless because she mostly doesn't like perfume herself, while her husband dislikes it even more. Then suddenly she discovered V & A and loved it, but her husband hated it, so I am currently on a mission to find a smell-alike for her that her other half could live with. It is a challenge to get anything past such bristling defences!

I'll give it a try, and try to get him to sniff it. I think that he was OK with Indult Tihota, but that's still at a price boundary that I fear to cross. (Partly because, if I cross it once, will I feel free to cross it repeatedly?)

I have not tried Tihota, though I do like Isvaraya, notwithstanding my slight squeamishness around a plum note. I know what you mean about crossing price boundaries repeatedly. Having shelled out for Ajne Calypso (the 15ml size!), I feel that pretty much every scent on the planet is a relative bargain, including most of the rest of that line! : - )