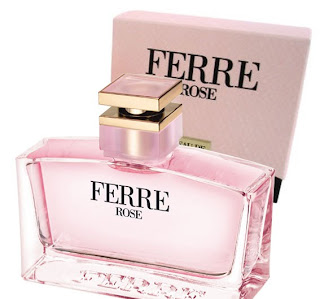 In the Venn diagram of fumeheads (Blob A) and fans of our UK Celebrity Big Brother (Blob B - or should that be BB? or CBB?), the infinitesimally small intersection may well have been as exercised as me last night by the perfume Ivana Trump was liberally spraying on just before her eviction. It was a pretty subliminal shot, mind, but the low slung rectangular bottle, the pink juice and the distinctive chunky, squared off top made me think that it had to be Ferre Rose EDP by Gianfranco Ferre. I briefly touched on this scent in my Choco Chanel post last December, describing it as a "foghorn rose", if my memory serves me. Ferre Rose is the epitome of obvious femininity, which kind of fits the persona Ivana presents.

However, given her location in New York with its myriad upscale shopping outlets - not forgetting her squillion dollar fortune - a bottle of Ferre doesn't quite fit the cost profile somehow, even if it DOES fit a plausible scent profile. But I don't know another bottle out there with exactly that top. I just googled "Ivana Trump perfume" and fetched up her own fragrance line called "Haute Couture", however, none of those bottles look like the one on Big Brother!

Perhaps Ivana chose to take the Ferre Rose into the house rather than risk travelling with a more prestigious / expensive scent from her personal collection (her own range appears to retail for c$30 a pop)? I mean, look what Stephanie Beacham did to that vase Ivana won in the spoof Scandinavian awards ceremony? Dropped it on the floor and smashed it to smithereens, no less, for those who haven't seen the show, never mind that it was made of sugarglass and the ceremony was fake. Imagine how much more damage you could inflict in a butterfingers environment with 50ml of sticky pink juice? No, perhaps Ivana deliberately selected the most cheap and cheerful scent she owned, knowing that it would have to take its chances in the communal bedroom which she shared with muscle-bound hard man Vinnie Jones and cross dressing cage fighter Alex Reid (to name but two of her house mates).

My, what about that fruit salad opening! And the tricky, potentially sickly trio of freesia, gardenia AND hyacinth (on top of the rose). Hyacinth needs a lot of greenery if it is not to act as fragrant chloroform, but foliage couldn't have been further from the perfumer's mind. Just checked - the noses were Alexandra Jouet and Francis Kurkdjian. Alexandra Jouet is noted for Chopard Wish Pink Diamond, which is all you need to know about her part in this really. As for Francis Kurkdjian... well, it is to be hoped that he was on his lunch break during most of the creative process.

I plan to do a post sometime about the scents celebrities really wear, but for now, I will leave it there. I may or may not be right about my hunch, but regardless of what perfume Ivana Trump was wearing on eviction night, I would just like to say that she was a gracious and dignified participant, and all round good egg. Even if she does wear sunglasses indoors.
Posted by Vanessa at 21:16

Thanks! A kindred cranky spirit, I sense?

Your interest has been noted... : - ) The very next post will be on the perfume workshop I attended today and the two scents Mr Bonkers' mate and I created!

I wouldn't mind betting that the perfume was a "product placement" = given to her to use on the show as a sneeky advertisment for it.
I am not sure this ferre has reached our shores but rose is difficult and you either get it done so well or its "sicky" .
I guess the real question is - "would YOU buy it?" LOL
I don't know why but ... I have always liked Ivana .

Hmm, Lady Jicky, that is an interesting thought. If so, she must also like the Ferre as she was quite liberal in her application. I love rose myself - I had a "Road to Damascene" experience quite early on in this hobby which I must document some time. But I agree that it is a tricky note. I do own a bottle of the normal Ferre by Ferre and am very partial to it, I must say.

Yes, Ivana is a real trooper - and grafter - I enjoyed watching her in the house, and think her TV appearance has done her nothing but credit.

Just had a thought - if that Ferre was "placed" at the scene, Ivana doesn't appear to be used to such commissions, for she was holding the bottle with the label facing away from the camera.... : - )