Fascination Perfumery - Chewing The Cud And Working The Floor 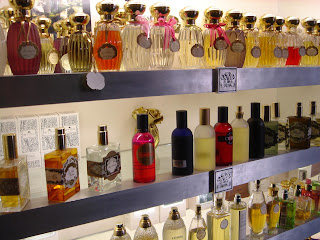 In the early days of this blog I wrote about my discovery of Fascination Perfumery in Lytham St Annes here.

Last Saturday, before driving up to my friend's party, I popped into the shop again. Well, "pop" is hardly the right term to describe my two hour visit - or was it two and a half hours? I rather lost track of time, as you do in that Aladdin's Tardis of a perfume store. I am sure I said goodbye to Lynn(e) the proprietor (one year on, I am still unsure about the "e") at least three times, but it was a real struggle to tear myself away.

My original post about the store gives you an idea of the wide range of niche brands stocked and its "rummage sale" style of merchandising, with every inch of counter space jam-packed with bottles. The EPOS payment terminal nestled in a forest of Serge Lutens testers, and I am surprised that more customers didn't pick up the latest addition, Cuir Mauresque, and peer intently at the label, waiting for it to say: "Pin approved" or "Return terminal to merchant".

This visit followed a similar pattern to last time. Lynne and I shot the breeze with a barrage of quick-fire questions to each other about anything and everything: our respective views on new releases, favourite notes, attitudes to naturals vs synthetics, the retail scene in London vs the rest of the country, the blogosphere, perfumistas we both knew and so on. However, Saturday is - as you would expect - the store's busiest trading day, and there was a constant stream of customers throughout the time I was there. Well aware of this, every time a prospective punter appeared, I would melt into the nearest fixture so as not to inhibit a sale. As a result, our marathon conversation was hilariously disjointed, with a number of our questions left hanging in the air - we simply couldn't remember them when the latest customer left just a few minutes later, purchase in hand. 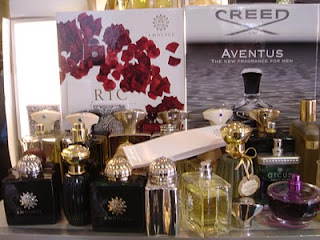 Yes, that is something which struck me very noticeably on this occasion: the fact that almost all the customers made a purchase, and if they didn't it was often down to the fact that the specific scent they were after had been discontinued. There were no gaggles of young girls loitering by the fixture of celebuscent testers, surreptitously spraying themselves from top to toe. Most of Fascination's clientele came in with a definite intention to buy: I observed an equal mixture of people requesting a scent by name and those who entrusted themselves to Lynne for guidance. A lot of the customers were regulars and Lynne was clearly already familiar with their preferences. "You like jasmine, don't you?", I overheard her say to one middle-aged lady whose older sister was set on buying her a bottle of perfume as a birthday gift. She tested Houbigant Quelques Fleurs, Bvlgari Voile de Jasmin, TDC Jasmin de Nuit and Versace pour Femme, and plumped for the Versace.

I must confess that I didn't make a purchase, though my eye lingered longingly at one point on a bottle of Etro Etra. And I managed to test a shedload of things along the way, partly as a result of my own forensic rummaging, and partly thanks to Lynne drawing my attention to new releases or scents she thought I might like. Unfortunately, I was much too pumped up to recall most of these with anything approaching a coherent impression, but the list below features most of the ones I sampled (based on deciphering the usual heap of scent strips I disinterred from the depths of my handbag today): 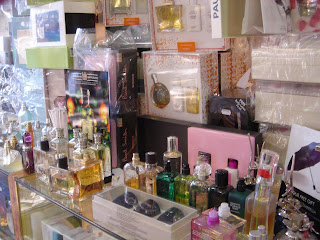 Hermes Eau Claire des Merveilles (great improvement on the original, as in less orangey, salty and weird-woody)
Annick Goutal Rose Absolue (straight up, dewy, blowsy, girly rose)
Annick Goutal Rose Splendide (extremely green, sappy rose)
Calandre Metal (metallic chypre!)
Amouage Memoir (much more like Epic or Lyric than expected - ie dusty/herbal/spicy number - can this be a false Memoir?? I was expecting complete sensory overload. Aha - maybe it was Man, not Woman!)
Amouage Ciel & Reflection Woman? (memory is fuzzy, but I remember both as being fresh, watery, very pleasant and inoffensive)
Serge Lutens Cuir Mauresque (another uncongenial SL in classic musty style)
Creed Aventus (not too overtly manly, crisp and slightly bracing - I could almost wear this)
Etro Via Verri (refreshing for reasons now lost to me)
Lubin Gin Fizz (as above, though there may be a clue in the name)
Floris Bouqet de la Reine (slightly aquatic? fruity floral)
Bvlgari Man (forgettable but nice, with added perk of Clive Owen's photo on the scent strip) 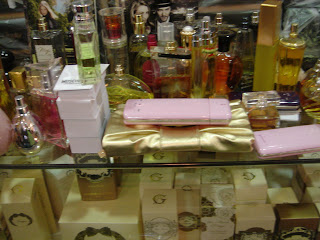 Yes, I am afraid that the actual sniffing experience was secondary to the fun of chewing the cud with Lynne - and her right hand man, Lorenzo, from time to time - though he was busy with customers a lot of the time.

Towards the end of the visit I had become almost as much of a fixture as the Creed display or the bargain bin of miniatures, to the point where a couple of customers mistook me for a sales assistant. One lady, whom Lynne had just informed that Dune body lotion was no longer available, stood forlornly in front of the Dior stand, before turning to me to inquire what might be the next best thing. Now there is a tricky question for a neophyte SA!, for in my experience there is frankly nothing like Dune - which I once heard described as "a Gothic beach scent". Rather lamely, I replied that Midnight Poison, while not hugely similar, also had a bit of a melancholy feel to it. Clutching at straws, I fully admit. But then, a breakthrough...another customer inquired about men's shower gel, and I was able to tell her that there was a JPG one for men in stock (I had just watched a chap buy a tube on Lynne's advice as a substitute for Joop!). "It's £19", I continued, on a roll, and the lady said she would take one.

Yay! Next time I visit - if I gauge it right - I may get to work at Fascination a whole Saturday, which would simply be the best fun that can be had.

Photos are all my own
Posted by Vanessa at 21:27

:D
Well, after what you described, I think you showed amazing character strength leaving after 2 hours.
But spending a whole day there? Ohh, what a wonderful way to spend a Saturday...

Helped by the fact that I promised to arrive at my friend's at a particular time!

Vanessa, I could get lost for hours in a place like this - what a selection! From your posts, you seem to be a rather social and chatty person, which I kind of envy, honestly. My ideal shopping experience is to speak to no one, be helped only if I ask and remain totally autonomous.

That may be because I suck at shopping.

What a wonderful place! I would stay for hours too.

Yes, you really could spend ages browsing here - it had the biggest range of any independent perfumery I have ever set foot inside.

I guess I am a fairly social person - my work involves interviewing people, so I need to be really. I do have days when I don't want to speak to anyone though, and that also goes for shopping trips. Depends very much on how "up" I am for the whole shopping - or sniffing - experience. You definitely need to be in the right frame of mind for both.

Oh, the pictures. On the wrong day, I would have to walk out with a mental note to come back. On the right day--hours of lingering and discovering and observing and playing a sort of Memory game with what is where and why that might be and OH! she has that and and and...

...and a healthy dose of silence, actually. I completely understand the melt away whilst sales transactions are going on, a practice which seems both polite/appropriate to the business at hand and which allows for processing breaks to the input.

As for Lubin Gin Fizz, I am inclined to like it but would like it more with less bubbly. Which I suppose means I would rather have a Lubin Gin Martini, but am happy to force a spritz from my small decant down the gullet every now and then.

How very cool to have a shop like that available. I of course have all sorts of shopping within range, but I'd happily trade a high percentage of that for an experience store.

I do know just what you mean about right and "wrong" days to enter a well-stocked perfumery, especially one as rampacked as Fascination. And if I ever did get a Saturday job there, "doing the knowledge" of what bottles live where, both out front and in the storeroom I don't doubt is at the back, would be a major challenge before hitting the sales floor!

A Lubin Gin Martini sounds nice - I will entrust you with the brief to design me a "barely there" scent such as I favour, possibly featuring vodka...

"Experience store" is absolutely right. And there was a whole other niche alcove I didn't photograph, because Lynne was in the midst of shelving and pricing new stock, which rather obscured the fixture. But it was full of more hidden gems.

Hi Vanessa, the Etri Via Verri ist a pleasent lemon scent that turns NOT intro a weird toilet cleaner scent, just waves away in an elegant though slightly artificial flowery non-defined something. I like it a lot but been wonderin why I should shell 95 Euro out for it. I am just badly (!!) in need of some mood-improving lemon and I wanted to get something else then the usual Un Jardin Sur Le Nil.
However, lemony scents nearly never turn nicely on me.
The one you sent me from the Penhaligons Anthology turned straight to the usual toilet cleaner on me. Sigh.

I completely agree that lemony scents are really tricky. Did I send you some IUNX Eau Frappee already? I'd be surprised if that went all toilet cleaner on you, though I could believe it of the Penhaligon's one. Those Etro scents are pricy (less so here - more around the £60 mark at Fascination), but that Via Verri one was undeniably pleasant!

I am so late reading this, but I always feel that Anne (Anna?) Pliska has that same...chilly oriental feel that Dune has. What do you think?

Thanks for stopping by! I will have to dig out my Anne Pliska decant, which I was planning to do actually, in connection with another post I had in mind. I remember it as orangey and maybe herbal or spicy? - not very approachable, certainly - so will look out now for any resemblance to Dune!