Astoria Perfume Wand - How To Magic Away £125 In One Easy Wave! 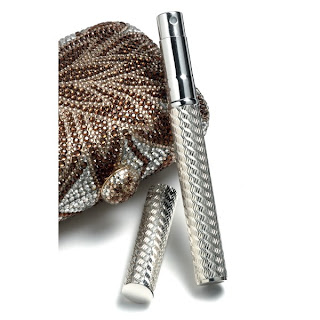 The other day I got a sales call from the Royal Bank of Scotland - from someone in the bank's Wealth Management team. As soon as the chap gave his name and mentioned the words "Wealth Management", I stopped him in his tracks and explained that I have never had anything he might consider "wealth" to manage, that's even before my business took a knock in the recession, and he seemed happy enough to abort the call.

Puzzled at having been targeted in this way, I took a moment to refresh myself with the definition of "wealth" in the eyes of financial institutions, and found this on the Moneywise site:

"While the big international private banks look for minimum investable assets between £5 million and £10 million, UK private banks are keen to appeal to a wider market and therefore may look to a minimum of £250,000 to £500,000."

The article went on to say that the definition of wealth management is actually more fluid than that, with banks such as the HSBC considering a client with investable assets of just £50,000 a person of interest - in terms of offering investment advice at least to these "mass affluent" customers, under the auspices of its Premier Service.

These tiers of affluence remind me rather of the distinction between "niche" perfumes, "masstige", "prestige", "mass", "luxury" and whatever else counts as a fragrance category these days.

But as someone who has not even used their Cash ISA allowance for several years running, I do think that on balance I was probably right to cut that salesman short, even though we didn't get into the nitty gritty of his asset thresholds... 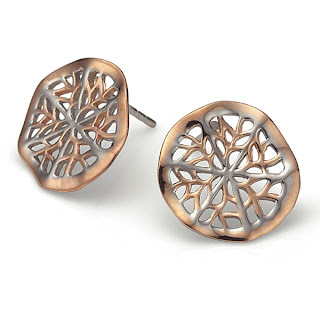 And then this morning I received two mini-catalogues in the post: one from a high end jeweller's which went straight in the recycling basket - Entwined Ring £6,995, anyone? (their list broker wants shooting!) - and one from Braybrook & Britten, which I kept because it has some sweet two-toned earrings designed to look like slices of Seville oranges, at just £45 the pair. A possible Christmas present idea for Mr Bonkers to give me, I thought, if he has any change left after buying the new top of the range MAC laptop he has his eye on...

Also in the Braybrook & Britten catalogue was this very fetching perfume atomiser - not sure where the name "wand" came from. Following my recent confusion over the correct term for "smelling strips" / "fragrance blotters", I wouldn't mind someone adjudicating on when an atomiser becomes a wand.

According to the blurb, this elegant sterling silver atomiser was made "in the same workshop that produces our Mont Blanc style silver pens". Did you spot that weasel word "style"? I missed it on the first pass, I must say.

"Proper glass phial and good quality mechanism", the description continues. So I should think at that price.

"It's exactly the sort of thing Audrey Hepburn would have pulled out of her purse with a flourish." Top marks for a vivid imagination. Presumably she would whip this stylish accessory out of her bag having previously decanted L'Interdit into it with the funnel thoughtfully provided. 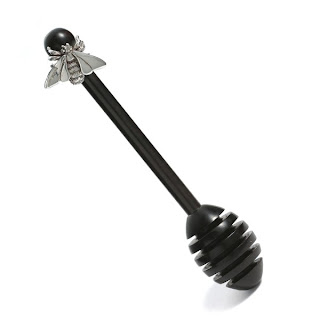 Do I sound a tad bitter at the fact that this item is a little out of my budget? Even more so than those metallic purse sprays you look at wistfully on Ebay now and again that cost all of a fiver? Ah, but when you are used to the plastic version from Accessories for Fragrance at 40p a time even a fiver sounds extravagant...

If money were no object, I would love to wave goodbye to £125 and buy this wand. The Wealth Manager I would probably have appointed if I had that kind of cash to blow might consider it a pointless frippery. However, it is nowhere near as frivolous a frippery as the partially silver plated bee honey dipper next to it, which will sting you for £75...


All photos from the Braybrook & Britten website
Posted by Vanessa at 15:09

Absolutely looooooove the earrings in the picture! Are those from Braybrook or are they a lookalike?

Extravagance and the holidays usually go hand-in-hand. Even if I can't afford it, I love perusing the catalogues. Now if I can find a Braybrook & Britten online catalogue, I'll be so happy :-)

Yes, these are all actual pics from the catalogue, and there were some lovely coral reef earrings in silver for £35 - so happily not everything costs an arm and a leg.

I am at a loss for words. The letters "wth?" come to mind, but perhaps that probably is just a little remnant from my online detox.

Nope. That thing looks like a honey dipper. Which is the only name I know of for the thing you bloop down into the honey pot and then extract for purposes of drizzling honey on your foodstuffs or in your tea.

I am intrigued. I am charmed by the bee charm, as I am fond of things bee. Which brings me back of course to the honey. How DOES this thing work?

Enlighten me. I am clearly hopelessly uncouth. Not worthy of a purse. Probably a good thing, since if Robin Hood were to grab mine, all he'd have to distribute among the poor would be I.D. and some lowly sample vials of perfume. Okay, probably a chocolate bar. And receipts showing how the money I used to have was spent.

Incidentally, the earrings are quite fun. :)

Aha, the mysteries of catalogue thinking.

For some reason they have me pegged as someone roamin' in the gloamin' in high-end cashmere or quaintly rustic home-spun fibres from head to toe. Apart from boggling at the prices, the catalogue roams as far as the paper recycling box and no further.

I get things for comfortable shoes with easy-release velcro fastenings. And maybe the odd one offering Budget Dresses for the Maturer Woman with the Fuller Figure (aka cheap frocks for fat old women). - Though their polyester lovelinesses are invariably displayed on slim, young women.

You have correctly ID'ed the honey dipper - also known as a "drizzler" in some quarters. And I remember your love of bees now! The dipper strikes me as a fairly fatuous implement, but perhaps if someone were formally to demonstrate the art of drizzling I might be won over. Though not at that price.

I get those "hairy cushion" catalogues too, though maybe you are targeted even more, with being north of the border, in the same city as Hazel in fact! The main ones I receive are Toast, Brora and that Welsh place - Melin Tregwynnt? - with the spotty throws. None of them cheap, either.

Love the thought of your catalogues "roaming" as far as the recycling box... : - )

You are dead right about slim, young models being used in every context. I was looking at the Hotter shoe catalogue the other day, and it was the same script there, though Hotter have a more mature client base, having popped into one of their shops recently to check them out.

Wouldn't it just be lovely to have that kind of money though!

Though silver can be a devil to clean (says she, sour grapes-style)...

LOL...you said wand, my mind went back to perfume...it really is not so difficult to addle me these days. (I stand resolute in my delusion that "addled" is a state I am moved to, rather than live in.)