Molotov Cocktail May Have To Be Mothballed 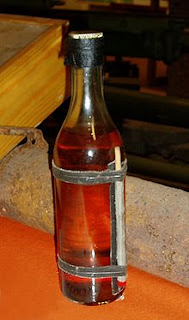 It looks as though I may not be able to use up my BNTBTBB tub of Cocktail body lotion after all, even though we cleared up the issue of the Best Before date the other day, and I had vowed to rise about the pervasive gasoline note.

I am sure I could have gone on applying Cocktail with impunity and abandon long after its notional expiry date of last Monday, but unfortunately Mr Bonkers has asked me to desist from using it. The last thing I would want to happen is for an ostensibly innocuous unguent to morph into an incendiary device, thereby jeopardising tthe fragile domestic harmony which has reigned since Mr Bonkers smashed up his computer the other weekend in protest at our sluggish broadband speed. (I am in charge of utility provider selecton...).

I note in Wikipedia that there is a dizzying array of recipes for Molotov Cocktails:

"Other flammable liquids such as wood alcohol and turpentine have been used in place of petrol. Thickening agents such as tar, strips of tyre tubing, sugar, animal blood, XPS foam, egg whites, motor oil, rubber cement and dish soap have been added to help the burning liquid adhere to the target and create clouds of thick choking smoke."

Crikey! But Mr Bonkers detected yet another variant. "You smell like Friar's Balsam", he declared shrewishly the other day, as I was getting into bed. Which was pretty cute of Mr B's olfactorily challenged nose, as he was at the bottom of the stairs at the time.

Well, I had to Wiki that as well, as it is one of those remedies of which I am only very dimly aware, like Tiger Balm, that root that sounds like gingivitis, and sundry plants ending in -wort.

I immediately warmed to Friar's Balsam, on hearing it described as:

"An Antiseptic Vulnerary & A Stimulating Expectorant", whose constituents are partly in dried form, partly in "liquid exudate". Exudates are very topical in our household at the moment, because according to the vet, Charlie Bonkers (the cat) is currently suffering from crusty green/black exudate around her claws, for which she is being treated with a succession of different antibiotics.

The main extract in Friar's Balsam is Styrax tonkinensis @ 47%, which sounds like something straight out of Caron's Yatagan, and certainly not like something I would care for. That particular ingredient always makes me imagine an evil constellation called Castoreum and Styrax...

Coming in at 4% are myrrh tears (Commiphora abyssinica &/or molmol). At that concentration they are likely to be imperceptible, but wouldn't you just love to see myrrh cry? : - ) Several generous slugs of styrax would do it for me.

Now one of the many alternative names for Friar's Balsam is Balsamum Traumaticum, doubtless a reference to its healing properties for wounds as diverse as chapped lips, "indolent ulcers", herpes simplex - but not, apparently, complex - fissures in places where the sun don't shine, and the intriguing-sounding urticaria, which turns out to be a persistent rash. But as I do not wish to cause Mr Bonkers undue traumaticum, I have switched to moisturing with Garnier Summerbody Moisturising Lotion Sun-Kissed Look (with natural extract of apricot). Getting a Sun-Kissed Look feels faintly inappropriate at Hallowe'en - a startled and irritated look is more like it, as the youngsters in their ghoulish get ups make their annoying rounds of the neighbourhood. And as regular readers know, I am ambivalent at best about FRUIT in a scented product, but this is rather pleasant. Sometimes it leaves my shins covered in yellowish streaks, prompting another life-threatening illness scare, though only till the next bathtime, but it is certainly an improvement on petrol.

Hold on, I may just have thought of something to give those Trick or Treaters when the chocolate bars and carrots run out...


Photo of Molotov cocktail from Wikipedia, photo of Friar's Balsam from well.ca, photo of Trick or Treaters from Wikimedia Commons
Posted by Vanessa at 18:16

How many Trick or Treaters did you manage to "reward"?!

Poor Charlie Bonkers - what has that cat been doing to her claws? Dabbling in the out-of-date Cocktail?

Yes indeed - or one from Gormenghast, or possibly a friend of Miss Havisham?

The doorbell didn't ring once! The Trick or Treaters may have rumbled me...

The cause of Charlie Bonkers' illness remains a mystery. In the past we might have suspected contaminated vole entrails, but she hardly budges from the bed these days.

Friar's Balsam! It used to be used in hospitals for patients to inhale to clear their nasal passages after an anaesthetic.
I successfully cured a persistent problem with glue-ear (resulting from hay fever) by nightly inhalations of Friar's Balsam in steam. Brilliant! And it's a nice smell too.

Glue-ear sounds nasty and glad that Friar's Balsam shifted it! Maybe I could do with some for my chronic post-nasal drip, if that is not TMI.