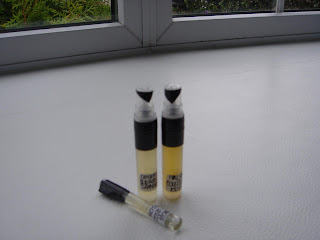 I thought I had said all I ever wanted to say on the subject of insulation tape and perfume decanting here: the etiquette surrounding its usage in swaps (vs other tape types), the significance of colour, the variety of application techniques - even the passing resemblance of black insulation tape to Bvlgari Black, the perfume - surely I had fathomed it all?

But then last week I received a sample and a couple of decants courtesy of Olfacta of OlfactaRama. I won them in a draw, which is most unusual for me. I never win lotteries or raffles as a rule, and don't suppose I would even if I bought a ticket. But this time I got lucky and here are my prizes: Halston Couture and Opium Fleur de Shanghai, plus a sample of Les Parfums de Rosine Rose d'Homme. 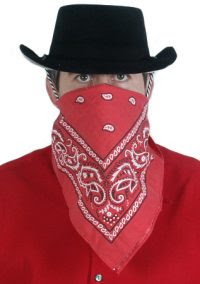 For anyone unfamiliar with the scent, Halston Couture was launched in 1988 and is a woody chypre, with notes as follows:

I cannot top Olfacta's summary of this scent as: "a take-no-prisoners spicy, bitter green chypre". It couldn't be further from my thing to be honest - to give you an idea, I find even Estee Lauder Private Collection a bit severe...However, I was curious to try it, because a former BF gave me me some kind of Halston perfume in the 80s, though clearly not Couture, because we had already split up three years before its launch. 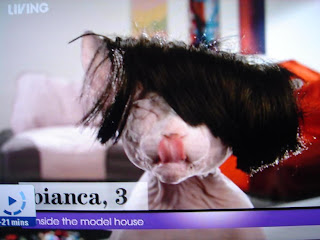 On opening the package I was struck by the little black beards of tape on each of the atomisers, protecting the nozzles from leaking. From beards I was suddenly reminded of those neckerchiefs that cowboys wear, often backwards (men after my own heart!)
Without further ado, I asked Mr Bonkers for his off the cuff thoughts on the tape triangles.

"Hitler!" he said, quick as a flash. I think he is referring to the late megolomaniac dictator's diagonal comb over. And that evening we were watching an episode of Britain's Next Top Model when we spotted this cat...!

...Swiftly followed by the similarly asymmetric hairstyle of one of the judges, Julien MacDonald. Who happens to be a couture designer. And one of the atomisers bearing this nifty tape arrangement contains Halston Couture. So the wheel of whimsical resemblances had come full circle. (Not before time, I hear you mutter...) 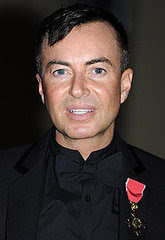 Photo of cowboy from sillyjokes.co.uk, photo of Julien MacDonald from fabsugar.co.uk, other photos my own.
Posted by Vanessa at 13:39

Oh, that's great! Such a visual imagination! (I usually don't do the "beards" unless it's an international shipment, because of customs snoops and also I think they're more likely to leak.) But I will always think of those little triangles as "beards," from now on!

The "beards" were very effective. And come to think of it you use less tape this way than in a full wrap-around scenario...Hmm, this method of nozzle protection could make its way one day into a book of "eco-tips" for perfumistas, along with labelling and re-using pipettes for the same scent (which I do), wiping down the glass front of your perfume fridge with a home-made vinegar solution - and of course the top eco-perfume tip of them all - not buying so much of the blinkin' stuff in the first place! : - )