Calvin Klein Beauty: Because Blandness Is In The Eye Of The Beholder 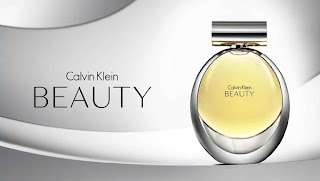 The other week the friend to whom I introduced Roja Dove Scandal was on holiday in New York. One day she popped into Saks, randomly sprayed Calvin Klein's latest release, Beauty, and instantly decided that I would like it. When she told me this I was chuffed that my budding perfume protégée had thought fit to divert some valuable sightseeing time away from the Empire State Building, Staten Island Ferry and Ground Zero to perfume testing in a department store, especially with a friend in tow who was not "of the faith".

Beauty was already on my radar, although I hadn't tried it at that point, and my friend's recommendation spurred me on to acquire a couple of samples on Ebay. I had read the rather sparse note description on Osmoz, which only lists ambrette seed, jasmine and cedar, but I like those well enough. According to the press release, the overall effect is meant to be that of a "neo-Calla lily", and I like lilies well enough too, real or illusory. 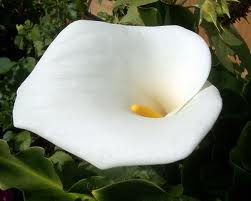 The problem with the CK scents I have tried to date is that they are either harshly synthetic citrus, or overly gourmand OR spicy OR fruity (respectively CKIN2U, Euphoria, Obsession and Escape).

So the sketchy notes for Beauty looked encouraging. And the positioning of the fragrance to women over 40 also appealed to me. This is another reason why I have passed over CK fragrances until now - they all seem to be targeted at attractive, 20-something "his and her" clones, who are invariably pictured semi-naked and entwined in one another's arms. Some of them could even pass for twins, but you prefer to think they just met on set that day. 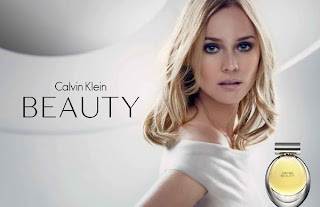 Which is not to say that I can relate to the specific sort of over-40s beauty which Diane Kruger represents in the adverts - even if she weren't only 34, haha! Yes, actual age aside, Diane's hair is way too blonde, her skin too fresh and luminous, and her white evening gown much too elegant for me to feel anything other than a stunted, grubby troll in her shadow. This is an impeccably groomed "ice queen" style of beauty, as typified by Betty in Mad Men, and is one to which it would be frankly hopeless for me to aspire. I would have to start exfoliating and stop biting my nails before I even got off the starting blocks, and to achieve that exact shade of "Light Natural Blonde" would take at least a dozen packets of Garnier Nutrisse, and a ton of Pre-Lightener Creme, and I still might end up looking like Courtney Love after a night on the tiles. Well, not the lips, obviously.

But none of this reality check stopped me from wanting to try Beauty, and I have worn it now about four times. It is much as I imagined, and just as Octavian describes it on 1000 Fragrances:

"Beauty is uncomplicated, easy to understand and universally known."

Yes, Beauty is familiar and relentlessly pleasant, and in my view none the worse for that. I get a lemony burst in the opening, then the only flower I can pick out is jasmine in that rather indistinct floral accord typical of so many modern scents, before it mutes down to a woody musky base, in which I think I may also detect vanilla. This fragrance strikes me a little bit like a mainstream take on Promesse de L'Aube, and given the shocking price of the Parfums MDCI range, even the palest of imitations are to be welcomed. 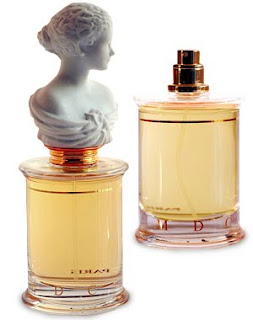 Beauty also reminds me of Chance (not the hyacinth note, but the musk and the amorphous structure), J'Adore L'Eau Cologne Florale (the lemony aspect and the magnolia notes, though J'Adore is fruitier and more watery, where Beauty is more musky), and Acqua di Parma Magnolia Nobile (like J'Adore, but more soapy and a tad plasticky). But if you merged the profiles of all those scents in one big olfactory computer e-fit, you would be in roughly the right territory. Beauty is a "luminous, lemony, woody musky floral" and if it turned up in my Christmas stocking, I wouldn't be sorry. I wouldn't have a clue where to put it, but I wouldn't be sorry.

Robin of Now Smell This, who - out of all the "proper reviewers" - has the most congruent taste with my own, sums up Beauty as follows:

"There is nothing really distinctive or interesting about it: it’s just adequately pretty and wearable, and my sentiments are firmly with the reviewer on MakeupAlley who noted that 'elegant and sophisticated shouldn’t mean dull'”. 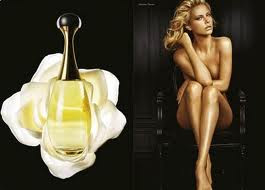 They are right of course - ideally, elegance shouldn't be boring. CK Beauty is "pretty and wearable", and more sophisticated than any other scent in the line - and a bit bland. But why I am so taken with this new release - and why I chose to write about it even though there are better noses and brains on the case already - is precisely because, RELATIVELY SPEAKING, for Beauty to be understated and elegant is pretty good going for a Calvin Klein scent and worthy of comment. Put another way, it is easy for Beauty to shine versus the other fragrances in the line. Not unlike the old adage about banging your head against a brick wall - it is so nice when you stop.

Added to that is the fact that out of all the perfume bloggers I know, I am the one most likely to be satisfied with a scent that is merely "pretty and wearable". On a scale of 1 to 10, where 1 is a preference for accessible, inoffensive scents and 10 is a liking for scents that are rampantly weird, my taste probably sits at around a 4. Some days even a 3. If Beauty was a perfect representation of leaves falling on reindeer fur that has been rubbing against lichen, bark and petrol-doused tyres, frankly, you wouldn't endear it to me any more.

CK Beauty isn't really a beauty, but it is certainly "personable". Or as my mother used to observe (somewhat cryptically): "Handsome is as handsome does." And Beauty comes in a simple, sleekly stylish bottle. Who knows, it could even turn out to be a "go to" scent. And I never thought the day would come when I would ever be IN2 A CK...


Photos of CK Beauty and Diane Kruger from moodiereport.com, photo of Calla lily from Wikimedia Commons, photo of Promesse de L'Aube from Luckyscent, photo of J'Adore L'Eau Cologne Florale from ideal.az
Posted by Vanessa at 18:27

Anyway, as I was writing a minute ago, I was wondering if you were going to write about Beauty since mentioning it the other day. :) I wish it would elicit any kind of response from me, it's just perfectly ok. But then again, on your scale (which I really like), I'm probably around 7, I like different (although I don't think everyone around me might be appreciative of that). :)

Oh, I dunno, FS, I think I might be about a 5 or 6 on your scale. But perhaps we 'fume bloggers just have a lower boredom threshold; we're always saying things like "been there, smelled that." My personal collection includes a number of "just pretty" fragrances.

I think Muse is right about the perfumista threshold...I'm possibly a 5, or more fairly, a 4.5.

Okay, on to Beauty. I had a chance to sample it yesterday and abhorred the opening. It was intensely harsh and 'perfumey' on my skin, and lacked the lemony flutter I'd hoped for to inter-mingle with the magnolia-esquedness (how many words am I making up???) I'd expected to find as in J'Adore l'Eau. But once the olfactory equivalent on nails on the chalkboard subsided and the base notes emerged, I quite liked it :-)

I like pretty, but I want to really smell the jasmine. I'll give it a try anyway.

So sorry about Blogger's continuing bad behaviour, and thanks for persevering. Was interested to learn that you are a 7 on my scale. Before I logged on and picked up Muse's and lovethescents' scores for themselves, I had already given the matter some thought, and off my own bat assigned Muse a 5, lovethescents a 5, Robin of NST a 6, kjanicki a 6.5, Josephine a 7.5, Angela of NST an 8 and Chickenfreak an 8.5, and I am still mulling over a few other people!

I know what you mean about the "been there, smelled that" feeling, but I think on balance I am more likely to like something pretty and safe than something groundbreaking and strange. And in that way I guess I am more in step with the market as a whole.

I am so sorry you got a "nails on chalkboard" and "perfumey" opening. By "perfumey" do you mean something in similar vein to Joy or Fracas, or some other perfumey perfume you could put a name to? : - ) I have to say Beauty is really soft on me and quieter than J'Adore L'Eau and Magnolia Nobile - and we appreciate so many scents in exactly the same way. But this may be one of the exceptions - and we have a few!

Do let us know if you smelt the jasmine. Don't expect anything approaching A La Nuit, mind!

What do I mean by 'perfumey'...tricky....maybe something screechily synthetic, perhaps? Don't get that from Joy or Fracas....get that from lots of mainstream stuff, hoping that i don't sound completely snobby!

I do like the J'Adore l'Eau but do.not.like Magnolia Nobile: Soapfest!!

"Screechily synthetic" is bad all right! I wouldn't like this myself if it had come across that way on my skin. And I agree about Mag Nob and the soap business. I like it despite the soap and some sprays seem less soapy than others for some reason, so I persist with it.

FS, I appreciate your review much more than I would appreciate the actual perfume, I'm afraid. My nose is simply too high maintenance to track down a perfectly respectable, nice enough perfume.

I am not at all surprised that Beauty is not calling your name - would you agree with my classification of your tastes on the blandometer as 7.5, where 10 is going in the completely opposite direction?

I sense though that you wouldn't need to do any "tracking down" to find Beauty. It is only October, but I was falling over Christmas boxed sets in store already!