Hairy Story No 2 - My Gourmand Eyebrows 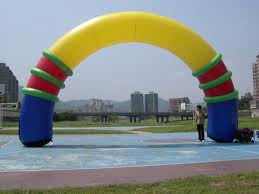 My gourmand eyebrows? "Enough of this nonsense already!" I hear you cry - or the US readers amongst you at least - because we don't use "already" in that way over here. Do not be alarmed, for the nonsense will abate soon - I am planning a serious post about some perfumes soon. Or maybe not a serious post, but I promise it will be about some perfumes. At least in part.

But meanwhile, on to my eyebrows. I was feeling unstoppable, you see, after walking out of the hair salon on cloud nine and several inches taller, not all of them due to build up of "product". And yes, Cloud Nine is from the same meteorological series of styling products as Wella High Hair Finishing Spray Firm and Sebastian Flaunt Halo Mist.

So I went home, gouged off all the bits of hair clinging to my face like hirsute iron filings to a magnet, then went straight back into town to have my eyebrows professionally shaped for the very first time, astonishing as that may sound to the average, well adjusted self-groomer. Okay, I have made desultory attempts to pluck the most impudently wayward hairs - only from underneath, the way you are supposed to - and very, very occasionally I have committed the brow equivalent of self-harming, and shaved a cm off one end with a Bic razor. For I am a bit mad like that: as a brooding teen I once managed to "shave" the hair on my arms and legs using just a pumice stone, which was the only implement that came to hand when the depilatory urge struck me. 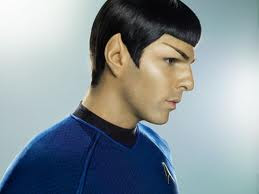 So yes, I think my new High Hair emboldened me to have the bushy circumflexes that pass for my eyebrows licked into shape. "Licked" being the operative word as I was soon to learn...But first I had to agree to a general styling plan. The brow technician (I believe that is the term) had quite thin, straight and emphatic eyebrows, like those lines you dash off quickly underneath a person's name on a greeting card envelope, typically at a slight angle, though not as much of an angle as Spock's eyebrows, which are getting on for crossed chopsticks, or would be if they went down a bit further. I will call the ones I mean "Underlining Flourish Eyebrows", or UFEs for short. Anyway, the technician explained that I was not going to have her kind of eyebrows, but just a tidier, more defined version of my own. The brow version of those lipsticks people call "YLBB" ("Your lips but better").

And so I lay down on the couch and relaxed while the technician did some initial gentle plucking before applying wax to three different areas of each brow. As the warm lava crept across my skin, I suddenly realised that it had a noticeable fragrance, namely a comforting, foody smell. 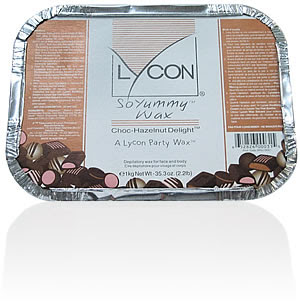 "Chocolate hazelnut" replied the technician. I am so rubbish at this spontaneous note recognition lark, but at least I was in gourmand territory.

"Goodness me" I continued, "Is wax normally scented?"

So that was all very strange - a pleasurable gourmand scent but in a bizarre context. Having Nutella smeared on your eyebrows felt as odd as using Hollandaise sauce conditioner or an exfoliating granola scrub. Actually, those two might just exist.

And how do my brows look now, after all that fragrant waxing? They are not UFEs, I am happy to report, and I think I have successfully navigated between the Scylla and Charybdis of eyebrow disasters, namely thinner, "Cruella de Ville" circumflexes and "TinTin dashes", about which Katie Puckrik warned me on her blog. 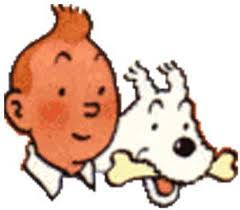 For the record, Mr Bonkers hasn't noticed I have had anything done. He did, however, say I looked "mad" in one of the photos of my new hair-do, which may have been a subliminal response to my covert brow realignment. Whatever...I like them, and anyway, it won't be long before my fringe grows back.

But meanwhile I've got the gourmand scent munchies and must track down a sample of Montale's Chocolate Greedy. Now, do they do a hair putty in that?

What ho! she said, archly or elliptically, as she watched Spock slide into gourmand wax. The journey has been a delight--though I feel compelled to point out that when I get through a gyration or three, the Person of Significant Other Spouseness more often than not *calls* me mad, rather than saying I look so.

BTW, in terms of noticing...sometimes those Misters tend to get the gestalt, but not the specifics...once I arranged for a pointed (in an arch manner) surprise, and greeted him with significantly different locks when he arrived home. Not color, but radical style change. "You look different," he said, "make up? new shirt? whatever it is, I LIKE it."

What I had done was attach a three foot fall of hair to my head to make a point. Apparently, I just did not realize what point, or how strongly, I was making it.

I think I shall dream tonight of mixing Nutella with paraffin wax while using a pumice stone to move a beard to a cartoon drawing's head. (I loved playing with those as a kid, incidentally. Using pumice as a depilatory, not so much.)

A pleasure to visit, as always...

Ah, yes, regarding gyrations, on the few occasions when my own person of Significant Other Spouseness reads one of my posts - usually to check how I have reproduced one of his comments - he has not said I am mad exactly, but certainly suggested that I introduce fewer concepts, which may amount to the same thing.

Love the story about your Other Ledge Lodger not noticing your "three foot fall of hair". How funny! Those girls who cry during their makeovers on America's Next Top Model should take note...

As my mother used to say (possibly in a sour grapes way, but ostensibly to cheer me up when I was concerned about some aspect of my appearance): "Who's looking at you?"

Did you manage to move that beard?

How did you manage having someone else fiddle with your eyebrows? I can do my own but I couldn't be doing with someone else working on them whilst I lay there, helpless. No number of Nutella-niffs would enable me to cope.

shuddering at the thought, Anna in Edinburgh

Well, I must be honest and say that there is always that slight element of doubt as to what you will look like at the end of the process, but I rather enjoyed the sensation of the plucking and even the wax being whipped off.

I love you're writing, too and adore Tin Tin!

I've had mine done twice (once by wax, once by plucking), and try to pluck them by hand now. I found it very difficult to say to a brow technician "Not like yours, please" and always came out with skinnier arches than I wanted. Two of my sisters have perfect brows, I need to interrogate them as they do make such a difference.

I think skinnier arches than you envisage are always a risk, but I was happy with the way mine turned out - UFEs would have taken more getting used to.

Do let us know if your sisters have any browcare tips!

You know, there is only one time that I have really liked how a professional shaped my eyebrows. Then after some time I moved too far from where she is. So after some bad eyebrows I finally do them myself with a mirror a brow pencil to point where to pull out hair and I don't think it's too bad. But I like when someone feels good about the eyebrows, as normally were we live we always speak about eyeshadow! I love the twenties style by the way.

I think eyebrow plucking is a very finely judged skill, much like fringe cutting. Just the right amount and it takes five years off you - a touch too much and it takes 45 off (in my case, anyway).

The Twenties style is a great one to follow!