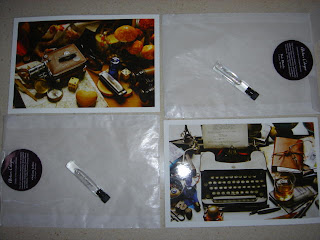 I very rarely win anything - where chance is involved, I mean. Every now and then I might win something on merit, like the schools scrapbook project that I entered in 1970, sponsored by the Australia High Commission. I distinctly remember my somewhat eclectic prize of a shoehorn and a packet of butterscotch. But raffles, lotteries, premium bonds, that sort of thing - not a peep. And then, to my surprise, I went and won not one but two prize draws organised by Olfacta of Olfactarama! My first haul consisted of decants of Halston Couture, Les Rosines Rose d'Homme and Opium Fleur de Shanghai, while on this most recent occasion I won a set of Atelier Cologne samples, accompanied by their evocative "photo story" postcards in greaseproof paper envelopes (or glassines, to any philatelists out there).

I have tried all the Atelier range now several times, and my favourite is Oolang Infini, though Bois Blonds comes in a close second. They were both created by the same perfumer, Jérome Epinette. 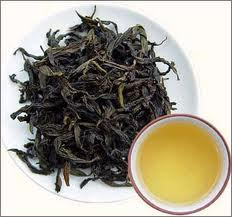 I was intrigued at the reference to blue tea, but it turns out that it isn't actually blue in colour. It is called blue because it is in between green and black teas in terms of its strength and the way it is processed. On reflection, it might have been less confusing just to call it "medium". And its production method also sounds interesting, involving "a unique process, including withering under the strong sun and oxidation before curling and twisting".

Sounds like me when I've overdone it on the sun lounger. Well, the withering bit for sure. Since I turned 40, I'd say. Though I do have a friend a few years younger than me who still dares to engage in "unprotected sunbathing", slathering on the olive oil and lying in a field all day. A one-woman crop circle, she is. 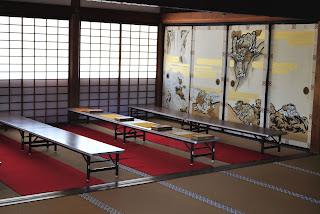 But I digress...The special thing about the Atelier colognes is their strength - between 12-20% - ie more like EDP concentration than typical eaux de cologne at 5% or so. Oolang Infini is the most delicate of the quintet, but even after 8 hours it is radiating a woody-vetivery, muzzy jasmine warmth. I get a delicate tea note and a brisk burst of citrus and vetiver in the opening, before the scent segues into a dreamy, limpid accord - not aquatic exactly - yet it feels translucent and very still, like a millpond. The tobacco, leather and gaiac notes are so muted that they barely ripple the surface. Picture if you will a leather folio bobbing in a pond. Assuming it would bob, that is. As the leather got progressively saturated, I suppose it might actually sink. But in my mind's eye it is bobbing, and there are faint plumes of mist/smoke hovering above the pond.

Now tobacco and leather are the last notes I would associate with an oriental style of scent, yet somehow the meditative quality of Oolang Infini manages to conjure up an oriental backdrop for me, rather than the Roger Ackroyd study ambience of the postcard. Okay, I will split the difference and settle on a writing room in Japan. For some reason gaiac wood also sounds oriental to me, though I see that it originated in the West Indies, and is now grown in Central and Southern America as well as Ghana and India. 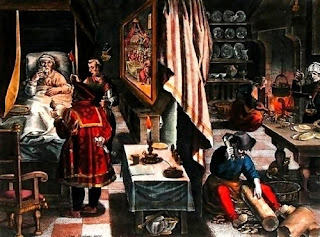 And along the way I tumbled to the bizarre fact that gaiac wood was the go-to treatment for syphilis in the 16th century, as depicted in this painting by the Flemish artist, Johannes Stradanus.

So, having jotted down my spontaneous impressions of this fragrance - with just the postcard image of the typewriter to go on - I went and found a YouTube clip where Sylvie Ganter and Christophe Cervasel, the founders of Atelier Cologne, talk about the inspiration behind the scent. Oolang Infini is the "baby" of the bunch, the "wild child", who can do as he pleases. Hmm, maybe that is why I am particularly drawn to it? : - ) And this baby also happens to be a writer, sitting at a typewriter waiting for inspiration to flow...

"His breath fogged the window while he watched new snow fall on the frozen lake. He came here to catch up on his writing and escape the city. At that moment, the fireplace crackled, ice settled in his glass and his thoughts made their way back to the ink."

The last line is a slightly more imaginative rendition of the literal translation of "sa plume reprend vie" as "his pen came to life again".

In the video, Ganter and Cervasel also set the record straight about the nature of the blue tea. Apparently, it combines the freshness of green tea and the smokiness of black tea, and it is this central and unusual note which makes Oolang Infini the most "mysterious" scent in their collection. 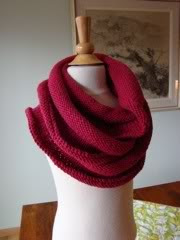 Now, while I have been testing the Atelier scents, other Infinity-type things have "mysteriously" crossed my path...Firstly, my good friend Lovethescents put in a request for a hand knitted "circle scarf". I initially assumed this was a scarf with spots on it, but a quick google revealed that it is in fact a "Moebius" or "Infinity" scarf, a new trend in neckwear of which I was only dimly aware. Unlike a conventional scarf, that you just wind round and round, Dr Who-style, - assuming you are not doing that Italian sideways knot manoeuvre or the backwards cowboy thingy, or, God forbid, a spinsterish woggle - the two ends are sewn together to make a gigantic, half twisted oval loop. Or some of them are gigantic, at least. You could end up looking as weighed down as a post for catching quoits, or those tribeswomen in the National Geographic, though admittedly some of them have the added discomfort of saucers in their ears.

And there are different modes of construction for these various Infinity scarves, of which the most tricky looks to be the "knit a volcano/walnut whip in the round" method illustrated. I think I will give that a miss and go for the simpler "start at one end and keep knitting till the desired length is reached" technique.

And also around the same time, I spotted this headline in my local paper: "REDUCED PRICES TO SWIM ON HORIZON". It is actually about a plan to offer the under 16s cheaper rates to a local leisure centre, but you can understand why I thought it was something to do with an Infinity pool. Given the amount of council tax we pay, every home in the Borough should have one really.

Photo of tea from cupmakerinfo.com, photo of writing room from picasaweb.com, photo of 16th century painting from flickr.com, photo of scarf from spudandchloe.com, other photos my own.
Posted by Vanessa at 12:41

I love all the Atelier Cologne scents, this line is a great addition to the market, I think. I even have a hard time picking a favorite now when I think about it, I'll just leave that then. ;) Your reviews are always so funny and quirky - a great read!

The good thing about a circular scarf is your head won't flop to the side when it's removed. Those poor souls with saucers can't take the rings off. I think as crazy fashions go it's almost better than loading heavy objects on a baby's head to have a "delightful" flat forehead a la Mayans. Congratulations on your wins.

It is a great addition to the market, I agree. The "intense cologne" premise sets them apart as a range, and they are very upbeat and refreshing.

LOL re the head lolling issue! I know I can count on you for a dotty - nay, bonkers - take on things!

I didn't know that about the Mayans. That's as bad as foot-binding, though it's a thing of the past I believe.

Orange Sanguine was already on my "to try" list but will add Oolong Infini after your review - it has lots of my favourite notes and sounds very calming.

I got an infinity scarf for Christmas but only found out it was called that when I read your post this morning!

Welcome, and with a fair wind down the M40 your package may arrive today!

When I first tried Orange Sanguine I wasn't too sure about it and thoughts of being "tango'ed" sprang to mind, but today it is softer, like wearing a freshly pressed blood orange juice from Waitrose. I am enjoying it more and more - I haven't tried an orange scent that smells quite like it - and it could be very nice for summer.

Oh, and the diversity of terminology for scarves has been an eye-opener to me too!

Oolong sounds infintely appealing :))) But tea scent somehow always sound better on paper than on me...maybe this one will be different!

With any luck you will find that the leather and tobacco give this scent added ooloomph.

That's cheered me up no end!

From the shoehorn and butterscotch on, I was chortling merrily. (The "one-woman crop circle" doesn't read this, does she??)

Thanks for all the chuckles. Too many to single more out.

Am glad this perked you up! The "one-woman-crop-circle" doesn't read this, but she has a robust sense of humour, so I am confident she would take it in good part. I have even lain in that field with her, but found it a bit scratchy. : - )

Entertaining and educational, as always!

Those are some great prizes you have there. I have only tried one Atelier, the Orange Sanguine. It's quite lovely and packs a punch.

I once (not so successfully) crocheted an "infinity scarf". It was mind boggling to me. I prefer the "start at one end and keep knitting till the desired length is reached" technique as well. It has closure!

I'm waaay late on this one. But not one to be shy abot throwing my two cents in....... This is a beautiful scent. Have not, until now, been able to find a "tea" that I get along with. The lightness of the leather with the mellow oolong is perfect. Going to venture out into the heat and humidity with this gem today and we will see how that goes! Great review! I am a knitter also so this is a one-stop blog for me.

Thanks for stopping by! Pleased to hear you also like this one - the tea/leather blend works so well, I think - hope you find it does the job in the heat today.

It is nice too to meet a fellow knitter, and I am happy to help you multi-task with your hobby-related blog reading! : - )

I am working on a moss stitch matinee jacket for the baby of a fellow fumehead at the moment. And Bloody Frida is another knitting perfumista if you are not already familiar with her blog! She probably features her crafting projects more often than me, indeed.