"Bag Of Hell" Update: Holding The Hellish And Rehoming The Ho-Hum 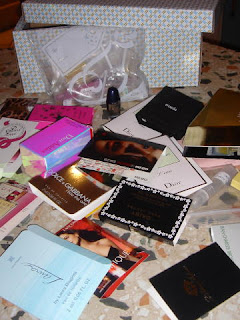 In my latest post about swapping on Makeupalley, I puzzled over how to offload my "bag of hell", namely the hoard of uncongenial samples I have somehow managed to accumulate over the course of 70 odd swaps.

Spurred on by the comments from readers, I made contact with the Domestic Abuse Liaison Officer at our local police station, and yesterday entrusted her with a shoebox full of scent. In the end, I baulked at giving away samples that I consider frankly horrid - these I am holding on to pending a "Bad Perfume Week" group blog event at some point in the future. You guys agreed with me that these women had probably been through enough without their nostrils suffering a fresh "assault".

So in the end I gave them every designer carded sample I could lay my hands on, of which I either had a spare/full bottle/mini, or which I decided I was probably unlikely to get round to using. Additionally, about half of the bag of hell is on its way to a new life - a mixture of designer and niche scents in mostly 1ml sample vials, which I considered "meh", but which just might be someone else's cup of tea. It turns out that they weren't really that hellish in the first place... And now the remaining, considerably smaller, bag doesn't offend me nearly as much.

A big thank you is due to those of you who encouraged me to bite the bullet and simply give my unwanted samples away - I feel much better for doing so and should have done it sooner!
Posted by Vanessa at 12:53

BRAVO! So many women will be able to regain their sense of equilibrium and self-worth via this generous gift. Much applause and love!

That's really great Vanessa. If those women get even a fraction of the joy we do from sniffing something new, it will be well worth it.

Funny how that ever increasing bag of unloved samples can get you down; it's partly why I started swapping recently. Though trying to build up the impetus to do something about it is half the problem!

Bravo is right!! Since I actually ran a homeless women's center for two years, I know how much these little treats cheer the ladies!

Wonderful idea. Isn't it amazing how much pleasure 1 ml of perfume can give?

Thanks again for your encouragement here. : - )

A couple of police officers had a tentative rummage in the box, but I am confident that the full contents will have been passed on!