Bitesized Not Quite Reviews Of Perfume-Themed Books: No 1 - The Rottweiler By Ruth Rendell 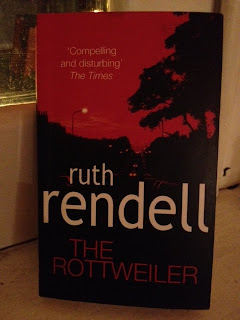 I guess with a title like The Rottweiler, any kind of review - or even a not quite one such as this - was bound to be "bitesized", in a manner of speaking. I must firstly confess to not having read much of anything lately. This has been partly due to the upheaval of moving and the cat being ill, but equally to the fact that the central heating system at Bonkers Towers is seriously underpowered. Compound this with an original Edwardian cast iron bath that turns hand hot water to barely tepid in a matter of seconds, and you have a recipe for showers. Or you would do if I had one. In this instance you merely have a recipe for Very Business-like Baths. And before you ask (very reasonably) what all this has to do with a thriller boasting a perfume theme, the thing is that I do most of my reading in the bath, or used to at the old house.

So it has taken me almost nine months to read this book and finally finish it. In truth I think I would have made speedier progress - in or out of the bath - if it had been more engrossing. I am a big fan of the thriller genre as a rule: I devour all those Kathy Reichs with "Bones" in the title, for example, and equally enjoy sensationalist TV programmes of what ex-Mr Bonkers used to take pleasure in calling the "forensic prostitute" genre, on the basis that the killers' victims were very often ladies of the night.

Not so in The Rottweiler, as the murderer is dubbed. He does murder young women - a whole clatter of them indeed - and takes an item of jewellery from their dead body as a trophy. Curiously, he doesn´t do any biting, just garotting, so the name of the book is a bit of a misnomer. And by the same token, though the novel does indeed have a perfume theme - central to the MO of the killer, no less - it doesn´t make its appearance till about Page 320, by which point I have long since lost interest in the otherwise lacklustre characters and plot. Which is a shame, as the revelation of the perfume connection is dark and deeply disturbing when it comes.

Yes, from Page 1 I was keeping an eagle nostril out for references to fragrance, and apart from a few desultory mentions of so-and-so wafting this or that unspecified scent before them, there is very little for a perfumista to get their teeth or nose into. I do recall one character sporting a tuberose scent by Jo Malone (I didn´t know there was one - on the face of it this sounds like an olfactory contradiction in terms!), but that is about it, till you get past Page 300, as I say.

So I would say give this book a miss, belated shocking perfume-themed denouement and all. I like thrillers, and I usually like the work of Ruth Rendell, but this book signally fails to grab me by the jugular.
Posted by Vanessa at 11:23

Hey Bonks - I'm surprised that I have never read a Ruth Rendell book. Now I'm going to have to search her out! Which of her books would you suggest first?

Well, two of my personal favourites are A Judgement In Stone and A Sight For Sore Eyes, while A Dark-Adapted Eye (Plume) is also considered one of her best works, though I don't think I have read that one. You might know her as Barbara Vine, her other authorial name?

Adding to my 'to read' list! And nope, don't know her as BV either. Thanks sweets!

That's a shame about the bath and the book. Jo Malone does do a tuberose perfume but in the Fracas league it is not!

I hope you find a thriller that really grips you because a good book can really take your mind off things.

Thanks for the heads up on the Jo Malone tuberose perfume - I must investigate further.

I agree that it is lovely to lose yourself in a good thriller, but as it happens I have found a page turner of another sort - review will be along soon!

I haven't heard of Tuberose perfume by Jo Malone until I read your review and did some investigation. It either was a limited edition or just a discontinued cologne. But it's not in the current Jo Malone's line-up (and haven't been for a while).

Thanks for the clarification. I don't follow the Jo Malone releases all that closely, and in one of my sustained blinks it looks like I missed this one. : - )

What would you say was your number 1 problem with this book?

Well, apart from the distinct lack of perfume content till very late in the day, I guess it was the thin characterisation, maybe, and the rather dull sub-plots. Or I found them dull, anyway.