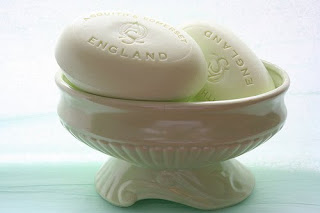 Last month I related how my partner, who dismisses all perfume as smelling of "craft shop", and only uses soap and water himself, had responded favourably to the scent of Heyland & Whittle Tea Tree soap on my skin. It was so unusual for him to like any soap other than Palmolive, his default brand - which I personally think has quite a strong, industrial fragrance - that I decided to nurture this embryonic appreciation of quality soap whenever the opportunity presented itself. My good friend Lovethescents once suggested spraying my partner with cologne while he slept, in a bid to get him to develop a liking for the stuff, but I was concerned that such a daring stunt of "stealth perfuming" might backfire, although the principle of exposing and acclimatising him to the thing he purports to hate remained sound. Thus it was that I came up with the idea of a gradual process of in-home soap gentrification. Slivers of Palmolive in the bathroom, en-suite and guest cloakroom would be replaced with delicately scented cleansing bars from the finest purveyors of soap, notably Asquith & Somerset, whose ranges often turn up in T K Maxx @ c£7 for three 150g bars. In the last couple of months I have successfully managed to infiltrate Asquith & Somerset's aromatic "Green Fingers" variety, swiftly followed by Patchouli & Sandalwood. Emboldened, I actually gave my partner a box of Olivia Care Verbena scented soap (very similar packaging to A & S!) for Christmas, and he immediately used a bar in his Christmas morning shower!

Which is not to say that he is going to be splashing on Chanel pour Monsieur like the lad in the Lynx advert before the year is out, but it is nonetheless a small but significant step in my spousal olfactory reprogramming mission...
Posted by Vanessa at 14:43

No one wishes you more luck in your mission than your readers, I guarantee!

I do love some creamy soaps, myself. My favorite brand is by far Lucia. Chock-full of shea-y goodness, lightly fragranced with gorgeousness like "goat milk & linseed" or "cherry tomato & basil". Can't get enough of those.

Found those Lucia soaps at an online "night and lounge wear" retailer in the UK called Hush. They do look very high end indeed. I think my other half may be ready for the goat milk one...