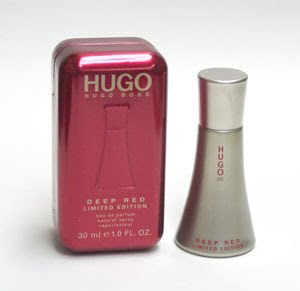 Hugo Boss is a designer range for which I had little time until the other day. The name alone has an air of boardroom bombast; it conjures up a man with taut pecs and a distasteful swagger. Some of the bottles are clumpy and functional. The latest feminine release, Boss Orange, smells like furry orange squash (as in the drink, not the pumpkin). That said, I did own a bottle of Hugo Boss Femme quite early into my hobby, which I thought feminine and pretty at the time. 600 perfumes later, it struck me as a bit girly and pink, and has since gone to a good home in the States.

Then the other day I was re-reading a survey in The Daily Mail (I know, I know, anyone would think I actually take the paper, given how often I quote from it!), where 50 high street perfumes were rated by a panel of critics, and I noticed that Hugo Boss Deep Red was awarded 4 out of a maximum of 5 points. And one of the judges was Roja Dove, no less. And the accompanying comment also intrigued me: "Over-the-top sexy. Men will instantly want to go to bed with women wearing this."
So next time I was passing Boots, I had a spray from a tester and was very pleasantly surprised. I got a light, sparkling and clean hint of fruit, followed by a languid musk and vanilla trail. I am not a fan of fruity scents as a rule, least of all ones containing blackcurrant (see my post on DKNY Delicious Night), yet the fruits in Deep Red were reeling me in. The name "Deep Red" suggests a heavy evening scent to me, the fragrance equivalent of brocades and velvets, yet this perfume is gauzy and light, but with a sensuous drydown. I could see it working equally well for day or night.
top notes
Blackcurrant, Pear, Tangerine, Blood Orange
heart notes
Ginger blossom, Freesia, Pittosporum, Hibiscus seeds
base notes
Mysore sandalwood, Cedarwood, Vanilla, Musks
A week on, and I am now the proud owner of a 30ml limited edition bottle in brushed silver (from Ebay). It is slightly scuffed here and there, but the juice smells fine. I am even thinking that if I was condemned only to wear designer scents - excluding Chanel, just to make the challenge harder - this would end up being a wardrobe workhorse. Am I embarrassed to admit I like a Hugo Boss fragrance as much as I do? Well, I guess I am blushing slightly, though it is more a Touch of Pink than Deep Red....
PS Does anyone know what Pittosporum is? Sounds to me like a form of dry rot or possibly an early prototype of homo sapiens.
Posted by Vanessa at 14:13

I know a lot of women wearing and loving Deep Red, as Hugo Boss is very popular in Germany. But honestly, I did not like it. I liked the normal Hugo Boss in the round bottle, and Boss Woman, they are wearbale nice scents.
Too bad we have fallen for real scents ;-) too bad for my account in any case.

I didn't care for Boss Woman I don't think (appley and somehow thin) and am not sure I have tried the one in the round bottle, if it isn't the pink Femme. Although there is one in a round gold bottle called XX. Could that be the one you mean? Niche scents are crippling for the old wallet, I agree, which is why it is refreshing to find a decent designer scent - my bottle of Hugo Deep Red from Ebay only cost £11!