The Scent Crimes Series: No 7 - "Binning" The Classics 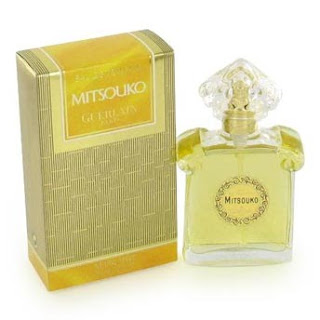 The other day I helped a fellow shopper in Asda to find a packet of polenta, and thought as I did so how much our small market town had come on in recent years in terms of the range and quality of food items available. You can now also get Dr Karg crispbreads from Germany, which are not just sprinkled with pumpkin seeds, but have molten Emmental drizzled on top. Our Marks & Spencer does a nice line in Gastropub meals, which you could almost pass off as your own, and the new deli in town stocks every kind of arcane condiment you will ever need - and many you won't.

All of which scene-setting helps to explain why I was so disappointed with the response of my local department store to a question about Guerlain posed by a friend of mine. The store has a sleepy, oldfashioned air about it, admittedly, but stocks a wide range of designer fragrances, so when she reported the following exchange it came as a bit of a shock.

Friend: "Hello there - I am looking for a bottle of Mitsouko."

Friend: "That's right - by Guerlain (pronounced in a perfect French accent). Do you have their range?"

SA: "Right. I mean, you could try that discount chemist further down the high street - they have bargain dump bins by the till with remaindered and old stuff in them. And it is quite cheap too. That's the only place I can think of."

The chemist in question did indeed have such a bin, containing dusty minis of Joop! and Calvin Klein, boxed sets of Coty L'Aimant, Elizabeth Taylor White Diamonds, Elizabeth Arden Red Door and Sunflowers, all nestling amongst bumper packs of tissue and facial wipes.

I don't know why, relatively speaking, the supermarkets in our town should be so gastronomically advanced, while our department store is such a backwater on the perfume front. Actually, it is a backwater on EVERY front, so I can kind of see why Guerlain might not consider such a store to be a "good fit" for its portfolio.

I think, though, that the house veers too much the other way ie towards exclusivity. Even the largest and most prestigious department stores in the UK do not stock anything more exotic than the likes of Apres L'Ondee and Chamade. You have to go to Paris or North America to find the full range, including my favourite scent of all, Plus Que Jamais. The shipping rates from France are punitive, mind, as I have inquired.

So yes, the most important message in this post turns out to be that Guerlain should be more widely stocked. Not necessarily in my town - but a few major cities in Britain would be a start...
Posted by Vanessa at 11:10

Many Guerlains are widely available in my town/city. And deep within the city, is a Spa de Guerlain complete with your PQJ (incidentally wish it was mine too!).

What I really want, though, is to taste those German crackers you described! Delicious!

Ah indeed - I was partly thinking of you and your Spa when I wrote this... Les Secrets de Sophie cheek by jowl with Samsara, imagine that!

I'd send you a packet of Dr Karg with pleasure, but I doubt it would arrive in one piece!

I'm a very lucky Londoner and would give a big shout to to Fortnum's for the stocking the whole lot of the export scents and doing it with utter charm (the lady who served me there last time when I was buying Apres L'Ondee was obviously a real perfumista and very knowledgeable). Honourable mentions to Liberty and all the John Lewis stores in the London area- and Bentalls in Kingston too- which is not really London.

I agree though many department stores are useless- or carry the (whispers) more horrid newer stuff. Duty free is also pretty useless- I asked for L'heure Bleu at Heathrow and got a very blank expression indeed.

Thanks for that low down on the London area, Rose, and I know just what you mean about blank expressions at airports, haha - Stansted is similar! Very intrigued about Fortnums - when you say "export lines", do they have the L'Art et la Matiere range as well - Bois D'Armenie, Rose Barbare etc - as well as my beloved Plus Que Jamais and those other ones that are hard to come by like Sous Le Vent, Vol de Nuit etc? Or Les Secrets de Sophie indeed? The Paris HQ led me to believe I had no option but to order certain scents directly from France, but that was last summer...

Libertys have an excellent range too, I agree, as do Harrods, Harvey Nicks, Selfridges and John Lewis, as you also mention. I heard a rumour that the niche perfume department on the 4th floor of Harvey N was going to be closed, but don't know if it did actually get the chop in the end.

have just been advised about what constitutes the Export line of Guerlain, and this does indeed include Vol de Nuit, but not the other scents I mention above. These are some of their "Exclusives" collection, and it looks like you have to leave the country to see them in store.
: - (

Love your blog and the topics you choose.
And speaking of men's Guerlains: Why is "Derby" so hard to find? Germany has many fabulous specialty perfumeries, but no sign of Derby. What a shame, sounds fabulous. I'll be in Paris in March, so you know I'll be hitting the Guerlain flagship store.
Looking forward to more here at your blog.
:-)
Michael

Thanks for stopping by and for your kind comments - your blog caught my eye because I travel to Germany for work, and may turn to you for the low down on the perfume scene in particular cities! (I only know Munich and Hamburg so far from a perfume perspective, plus a few of those wonderful Parfumeries you mention which you stumble across in even the smallest of towns.) There's a Guerlain boutique on practically every corner in Paris, but No 68 is the most fun, for sure!

I do hope you spot this as its a couple of days old and I have just found your blog!
Don't come to Australia! They are shockers here. Guerlain here seems to just stock up the face cream junk - yes JUNK - lets face it , if that worked the movie stars would not be having surgery and botox . Then there is the cosmetics which are OK but very overpriced but they keep them stocked up here and now to the Perfume - the reason Guerlain started in the first place. Its bloody sad. No or very little classics and good luck if you want a bottle of the classic PARFUM - its not here. All you see is the stinky Insolences, Samsara and some Champs Elysee and that new one with a stupid name that smells like all the others in the dept stores.
I am a long time lover of many Guerlains and when I think of what I used to be able to buy here years ago - I get high blood pressure! LOL

Thanks very much for stopping by and giving us the inside track on the Guerlain retail scene down under. I have been to Australia, as it happens, but that was in my pre-perfumista days, when I had no more specific requirements than another day of blameless sunshine and a mango smoothie.

Sorry to learn that you are so shortchanged - even more than us Brits by the sound of things, for as Rose mentions, you can at least find the export lines in London.

Your moniker suggests we might be evil scent twins on the quiet, given my other screen name of "VM I hate civet". But am glad you stumbled across the blog, as it is lovely to get your Antipodean angle on things! : - )