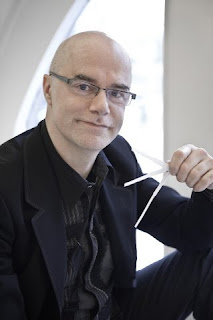 I still intend to compile a round up of my favourite fragrances from 2009, even though it is 10 days into January and a number of other blogs I follow have already covered this topic in spades. But at the end of the day these kind of polls are by definition a personal selection, so no two "Best Of" lists will be quite the same. And most of all I would like to do one as an aide-memoire to myself, my memoire being pretty shot at the moment.

But I am parking that idea for now, as I will need to hunt down a definitve list of all scents released in 2009 first before selecting my favourites, and thought I would turn my attention to another highlight of that year, namely my encounter with Bertrand Duchaufour. (With apologies to those of you to whom I related the story at the time!)

Back in the summer at one of the Basenotes mass sniffing events in London, we had been treated to a preview of the new Penhaligon's scent, Amaranthine. A number of us (including 100% of the women in the party, notwithstanding the fact that it was 11am in the morning and we had barely sipped our first glass of champagne of the day!) were dumbstruck at the perfume's originality and sultry beauty. Even the Penhaligon SA famously described it - without blushing - as "f***able". Then in September, one of the organisers of that event tipped me the wink about pre-launch parties for Amaranthine on consecutive nights in October at two of Penhaligon's London stores. Bertrand Duchaufour, the perfumer, would be in attendance to answer questions and autograph bottles. In a heartbeat I had booked my train ticket and arranged to stay at a friend's.

It was a wild, wet, autumn night, which meant that I arrived looking distinctly dishevelled and windswept, but on a selfish note, the weather also kept the guest numbers down, so it felt even more of an exclusive event. Ironically, my name wasn't even on the guest list (an administrative error, as I did book my place!) so I technically gatecrashed the party. : - ) When I arrived there was no one else there, and in the one and a half hours I stayed I split my time between talking in French to BD in bursts, then withdrawing if another guest walked in, and either talking to the sales assistants or a lady lawyer who worked next door, who had just popped in to see what the craic was. For obscure medical reasons she had no sense of smell whatsover (lending a darkly humorous touch to proceedings!), but wore Angel anyway for the hell of it.

I was so starstruck to be in the presence of one of the Premier Division of Noses that I cannot recall exactly what BD and I talked about, though I mentioned his recent Fragrantica interview with Michelyn Camen, where he went on record as saying that Dior Homme was the scent he wished he had created. We talked about my dislike of civet, which I wrongly referred to as "la civette" instead of "le civet". The French eat ragouts of "civette", which is a fawn. So I was basically talking about extracting a skanky musk from up Bambi's bottom! Then BD spoke in English when the lady lawyer joined us, and we evened the score in terms of linguistic near misses when he spoke of a gourmand perfume (probably Angel!) having "tasty notes".

BD also gave me a detailed run down of the notes in Amaranthine, of which there were predictably quite a few more than published - I remember tuberose and gardenia, and a whole clatter of spices that I have forgotten now. He explained his concept as being a creamy, white floral hung on a "green skeleton" and then dirtied up a bit.

It goes without saying that I bought the perfume, which BD dedicated to me in a silver pen - sigh! As importantly, he SMELT me several times on both arms - one wearing the parfum and one the EDP - and said that the scent smelt on me exactly as he had envisaged. It was gratifying to hear that I had textbook skin! : - )

I left on a cloud from which I have probably not yet quite come down. Amaranthine was my favourite launch of the year back in August when I first smelt it, and having met - and crucially been sniffed by - its creator, that top spot has been resoundingly confirmed...
Posted by Vanessa at 16:41

:sigh: I was, and still am, so thrilled for you that I can't even be jealous! What a wonderful evening.

Absolutely! Great recounting of an amazing thing. No jealousy here, either - just glad I signed up to your blog so I heard about this. I'm a bit of a fan of Fleur de Liane, but have not bought the bottle yet. But your description of Amaranthine (and what was said of it) makes me want to sniff that first, just in case....

Amaranthine is really lovely. I keep seeing references on forums to its being smutty and/or strange, but I don't perceive it that way at all. I think it would wear better on me in slightly-warmer, more humid weather, so I've put the decant away until, oh, March.

And how interesting to read of your encounter with M. Duchaufour in more detail! I'm sure that was a real highlight of your year.

Thanks for looking in, guys, and I hope you get to try Amaranthine some time, RNP - I think you would find its structure technically interesting.

Mals, I have to say that Amaranthine does come across as a bit smutty to me, in a way that Carnal Flower doesn't really. I think it may be cumin or whatever that spicy note is. I wore it on New Year's Day and it seemed to work in the cold, but it may well suit warmer weather as you say.

Hebe, it is a shame you missed the Ormonde Jayne meeting in December. Here's to more BN events next year that we can both make!

Truly wonderful time, you had....as you know, I've done a 180 with Amaranthine. I started off thinking, "what's so great about this?". Thankfully, I gave it some time and revisited her later. I love it now and get so many compliments when I wear it. Thanks for introducing 'er to me :-)

I am doing my level best to push Amaranthine on both sides of the pond, so am glad it was a hit with you in the end!

I don't know his work yet, unless he's created something I've smelled and didn't connect it to him.

But I can TOTALLY imagine the *thrill* of having the man who created a scent smell it on you. That's a sensual exchange of high order! If my secret boyfriend Michel Roudnitska took a whiff of me wearing "Bois du Paradis," I think I would swoon!

Hi LCN - you might know some of BD's work for Eau d'Italie - he is also now the resident nose for L'Artisan as well as taking on extra projects for Penhaligon's. L'Artisan's Havana Vanille is his, also Timbuktu from a while back. I think Nstperfume has an index of perfumers and all their works.

And you are right, it was a pretty swoonworthy experience for the average fumehead to experience!

It takes always several months until I decide to buy a FB. Last year it was Guerlain Eau de 68, which I could test at my bf's house (she bought it herself straight away, and is since then on her way to a perfumista).
Then... came nothing.
Then came Amaranthine, which I sprayed on just because of curiosity. Sniffing half a day on my wrist, I decided to "need" it.
I made several hints at home - more or less direct;-) and now I wait.
I wonder how long!!

Btw, I think Monsieur Duchafour looks... very unsexy. Duh. JCE has all my sympathy, he is my perfume god.
(BD is following him latest after Fleur de Liane!)

Thank you for sharing that moment! Enjoy it very much! And he clearly must have enjoied it when such an amazing nice person (gebildet und hübsch) like you hang on his lips. He is a man after all. He was surely flattered :-) he wouldn't smell that often on a men's arm *lol*

I think he was happy to speak French for a little while - as a rest for him, even if my French was decidedly rusty (eingerostet?).

If no one takes your hint about supplying you with Amaranthine within a reasonable timeframe, come back to me. It is Valentine's Day soon, so I have high hopes of Mr Beautyblog...but I wouldn't want you to go out of your mind with Entzugserscheinungen!