Unidentified Perfume Object - Blue Grass (Or Is This Just Fantasy?) 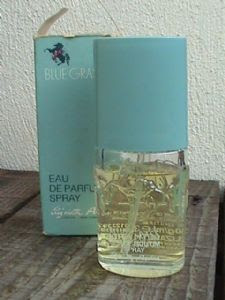 The other night, both still in our pjyamas in the evening due to his and hers colds of depressing tenacity, Mr Bonkers and I were watching some footage of a Queen concert from Christmas Eve, 1975. This got me wondering what I was doing on that day, aged 16 as I would have been, and eagerly awaiting my haul of presents on the Big Day.

Well, according to my five year diary from that time, the first part of the day of the gig doesn't exactly make great copy, for I apparently "felt dizzy" and "hoovered my room". Things pick up momentum later on when I read a novel by Colette, decorate the tree and attend a carol concert.

Then my eye strayed to the entry for Christmas Day, where I list my gifts:

Well, after my successful mastering of turkey roasting this year, I would be quite interested to know why the turkey was inedible in 1975, for my mother was a pretty accomplished cook. But even more intriguing is the reference to receiving a bottle of perfume - at age 16!

This all took place...er...34 years ago...and I have no recollection of being given perfume, let alone wearing it. I have been puzzling over and over as to what it could have been, and so far have only come up with Blue Grass as a possibility, as that was the signature scent of my English teacher at the time, whom I considered to be the last word in elegance and style. But other than that, I am frankly baffled...

Anyway, in pursuit of my youth I have ordered the very bottle pictured from a vintage seller, for just £9 including postage. It is an original from that era, and I am fully prepared for it to smell more like silage than grass. The plus side will be to own a period bottle of what may have been my very first scent!

And I will leave the last line to Queen, from the track Killer Queen, Sheer Heart Attack being the first non-compilation album I ever bought...

Perfume came naturally from Paris (naturally)
Posted by Vanessa at 16:39

Tried posting earlier but it never came up so I'll try again....

I'm green with envy that you kept a diary from waaaaaay back when. How fun. I might be Blue if I get some of that Grass. I look forward to your thoughts on a vintage beast ;-)

I am bracing myself for manure scents that would make Dzing! seem very DEmure by comparison...

This is the week for memory lane!! Well, I can't wait to read about your experience with your younger scent self. (Apologies to Ms. Scentself, herself...)

Will keep you posted!

Right, the perfume has come today... The box is very discoloured, battered and ripped, and the bubble wrap smelt of smoke, so I was a little apprehensive unwrapping it all. However, the perfume itself (after a very slight and brief off note in the opening) smells just GREAT! I have to compare this with today's formulation - it could be quite an eye opener.